A woman demonstrates in Montreal in solidarity with Lebanon during the July 2006 Israeli invasion. Photo: David P. Ball

Farah Koubaissy lifts a megaphone to the cheers of a crowd in downtown Beirut. The 24-year-old student, blogger and community organizer sports a calm smile, a keffiyeh scarf and a camera.

Koubaissy possesses a quietly infectious grin on most days, but today she has extra reason – as uprisings swell across the Middle East, the protests she’s helped organize over the past year have swelled from mere dozens of participants to tens of thousands.

“We really hope there will be an uprising in Lebanon,” she says. “The uprisings and revolutions in the Arab world are proving to the people that they can make change once they are determined to do it.

“There’s a new wind of change in the region, and the Left should learn how to benefit from it in order to radicalize the movement and its demands.”

Some of the organizers of this demonstration against Lebanon’s religiously based political regime – known as the “confessional” or “sectarian” system – were volunteers at Zico House, a hub for grassroots anti-capitalist organizers in Beirut, during Israel’s July 2006 invasion of Lebanon. Zico House provided direct aid and supplies to thousands of displaced families, and also operated an alternative media centre, a makeshift pharmacy, and a space for young activists to gather and mobilize international support.

“It was a very dirty war,” Koubaissy, a self-described revolutionary socialist and member of the Leftist Assembly for Change, explains. “Especially with the encouragement of Western governments and the silence of Arab ones.

“It proved to us as radical Leftists that the struggle against occupation and for national liberation cannot be separated from the battle for social and economic justice. Both struggles intersect.”

Last October, Koubaissy was arrested at a checkpoint outside Nahr al-Bared, a refugee camp where a 2007 Lebanese siege killed 50 Palestinian civilians. When soldiers denied Koubaissy entry to visit friends, she decided to take action against Lebanon’s “humiliating” segregation of Palestinians. Scrawling out a makeshift cardboard sign, she sat down in the middle of the road. She was detained and interrogated for 16 hours.

While organizers like Koubaissy are taking action in growing numbers to transform Lebanon, their challenge has been to build momentum in a divided country where the political conditions – most recently, a sectarian deadlock
following the government’s collapse last January – are unique.

“Everyone is inspired by all the uprisings,” says Oula Hajjar, a 30-year-old recent graduate who moved from Lebanon to study International Economics at the University of Montreal in 2005. “But we are looking for a way to frame it in a Lebanese way.

During its post-WWI mandate over Lebanon, France legislated a balance of religious and ethnic groups in the government, securing power for a traditionally pro-Western minority, Maronite Catholics. In the bloody 1975-1990 civil war – in which between 130,000-250,000 people died – factions struggled over this stranglehold on power, alongside tensions around the 400,000 Palestinian refugees in camps throughout Lebanon. Since their 1948 displacement, Palestinian refugees have been barred from many forms of employment, from owning land, and from citizenship. Today, countless bullet scars adorn many of Beirut’s buildings, serving as remnants of years of street fighting and a constant reminder of war. 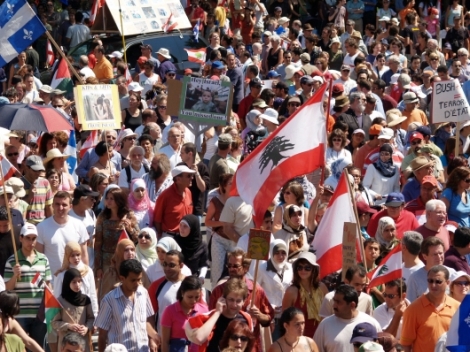 I MEET HAJJAR in a cafe in Montreal, where she scribbles in a black notebook fronted by a Palestinian flag sticker. It has been five years since Israel bombed Lebanon for 33 days, killing 1,200 Lebanese civilians. Stephen Harper declared, “I think Israel’s response under the circumstances has been measured.”

The war was triggered when five Israeli soldiers were killed in a cross-border raid by Hezbollah – a Shia movement that led resistance to Israel’s 1982-2000 occupation of parts of Lebanon. Both sides claimed victory – Israel for damage inflicted on both Lebanon and Hezbollah, and the latter for surviving the onslaught as an active guerrilla force and causing 120 Israeli military casualties.

On July 12, 2006, Hajjar returned for a summer visit to Lebanon, arriving on the last flight to land before Beirut’s airport was destroyed by Israeli jets. She chose to stay in the country through the entire war, becoming involved in relief efforts.

The war has fuelled activism against U.S. and Israeli policies in the Middle East, most notably international movements for self-determination and the global boycott, divestment and sanctions (BDS) campaign that seeks to apply economic pressure on Israel to end its occupation of Arab lands and denial of Palestinian rights. Many new people became supportive of such campaigns after the war, Hajjar says: “They lost the good image they had of Israel.”

But Hajjar, who grew up in the final decade of Lebanon’s civil war, always shied away from activism. Sectarian divisions and a lingering “spirit of the civil war,” she explains, too often complicate the issues and fragment the Left.
It was Hajjar’s outrage from witnessing the invasion first-hand which led her to get involved in solidarity work upon her return to Montreal. She joined Tadamon, a Canadian group organizing in solidarity with Arab self-determination struggles, notably Lebanon, Palestine and Egypt.

“In my life I never had the space before to act,” she says. “After the war, I felt I wanted to do something here.

“As Tadamon, we respect any kind of resistance of self-determination. We’re an anti-colonial, anti-capitalist group; we’re against any kind of oppression.”

Hajjar joined in organizing an international conference on the BDS movement recently, helping put together a workshop on “Israeli Apartheid as a Feminist Struggle.”

IN THE MIDST of the bullet-scarred, bombed suburbs of Beirut, a large dirt wasteland plays host to an impromptu soccer match between teenage boys. The field ends in a high wall of concrete and corrugated tin, which serves as the perimeter of an urban refugee camp, Bourj el-Barajne.

The only breaks in the concrete are metre-wide openings, which lead into a dark labyrinth of houses stacked atop one another, even overtop the meandering alleys.

Bourj, a Palestinian camp located in south Beirut, is typical: staggering unemployment, knots of loose electrical wires within arm’s reach, rats rumoured to be as large as cats. It is also a place where most homes have open
doors and a welcome is warmly extended in the form of sweet black tea, Marlboro cigarettes and lengthy conversations.

Kholoud Hussein works as a translator and has two teenage children. On her wall is a painting depicting Jerusalem’s Dome of the Rock.

“What has changed [since 2006] is now we feel we’re stronger and there is more hope to liberate Palestine,” she tells me. “The Israelis were defeated by the Lebanese Resistance, and they haven’t been able to defeat the resistance in Gaza.

“What hasn’t changed is the conditions for Palestinians in Lebanon. It seems some Lebanese don’t want to improve our life and situation by giving us some of our civil rights, at least.”

Although the situation is bleak, Hussein expresses hope inspired by the wave of protests across the Middle East – often referred to in the media as the “Arab awakening.” She concurs with the metaphor.

“The Arab nations are awake from their coma,” she says. “They are not following their leaders like before.”

“Most honest Arab people are convinced that through struggle and resistance all our countries will be liberated. This is great for our cause – the uprisings are giving us more hope.” 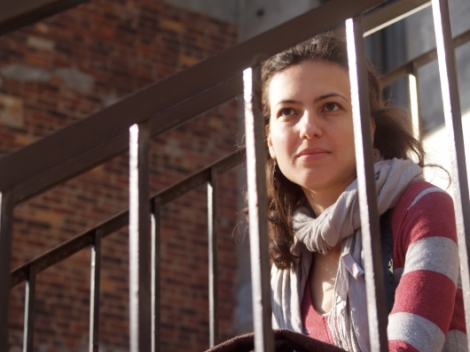 Oula Hajjar, a member of Montreal’s Tadamon collective. Hajjar was in Lebanon for the duration of the 2006 war. Photo: David P. Ball.

WHILE CANADA has lost international standing over its support for Israel’s policies – resulting in its embarrassing denial of a seat on the UN Security Council last October – Hajjar hopes Canadians also learn about their country’s own history of colonialism.

“The land was taken, people were killed, and companies sold products using [stolen] land and resources,” Hajjar says, referring to the wars, displacement and broken promises employed by Canada against Indigenous peoples.
“It’s similar, except the timeline here is older. But people don’t see it.”

“We should do more to link the struggles,” she admits. “If we just imagine Israel becoming like Canada, where Palestinians are the Indigenous people, 500 years from now Israelis won’t be talking about it. Like Canada, they’ll forget it’s not their land.”

Although she doesn’t know how soon she will return to Lebanon, Hajjar is certain that her community organizing will continue – an empowering part of her life, she says, even if it came about because of a war.

“People don’t realise the work being done by many communities and groups at many levels,” she says. She pauses when asked which moment has brought her the most hope. “… The day [Egyptian president] Mubarak stepped down… I was jumping!

“I felt like something that was dead came alive again. People were talking about Arab unity and using slogans that died long ago – that my parents dreamt of and lived. We’re living history – it’s very powerful.”