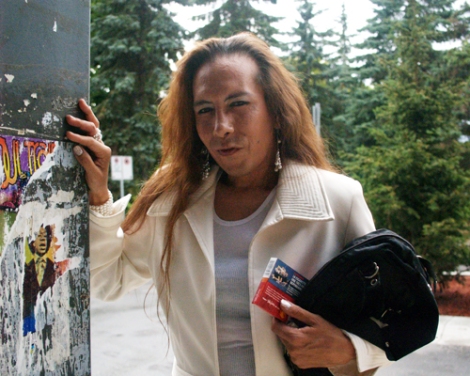 Winnipeg-based filmmaker Alexus Young was abandoned by police outside Saskatoon in the late 1990s. But, speaking at the International Copwatching Conference held July 22 to 24, she told Windspeaker she found her voice and purpose following the incident. Photo: David P Ball

Native people are more often killed or abused by police officers than are others in Canada, presenters said, but police actions are more often than not chalked up to ‘bad apples’ on the force instead of symptoms of systemic problems within police ranks.

“For those of us within Indigenous communities and other racialized groups, the lie of the ‘one bad apple’ excuse hides the colonialism behind the police,” said keynote speaker Leslie Spillett, director of the Winnipeg organization Ka Ki Kanichihk.

“The Canadian state is still prepared to use lethal force for its ‘Indian problem,’” she said.

“We can’t reform the systems. They were someone else’s vision. But we can use different systems of justice and right relations. We know they work.”

Several hundred people—both Indigenous and non-Indigenous—gathered for the second International Copwatching Conference in Winnipeg July 22 to 24. The conference was organized by Winnipeg Copwatch, a civilian police accountability organization which uses videotaping police, educating the public about their rights, and protesting abuses to oppose police brutality.

Presenters addressed the history of policing in Canada, beginning with the Northwest Mounted Police Force’s displacement and control over Native communities, the RCMP scoop of Native children for residential schools, and police involvement in Native protests during the Oka Crisis in Quebec, Gustafsen Lake in BC, and Ipperwash in Ontario.

All agreed that racism in the Canadian police is not a relic of the past.

“The people causing this pain to families maybe get a slap on the wrist. It’s pretty common that no one is charged or convicted.

“We’re facing extreme violence. We need to be critical of these mechanisms. I don’t even think the police have jurisdiction over Native people.”

Film-maker Alexus Young described her experience of being abandoned in winter by Saskatoon police outside the city in the late 1990s. It’s a notorious practice known as ‘midnight rides’ or ‘starlight tours’, which resulted in several deaths and widespread condemnation across Canada.

“The police just decided I was a target,” she said. “They just opened the door and said ‘Get in.’

“I didn’t ask to be driven out of the city, or sexually abused or beaten. I’ve lost three transgendered sisters to violence. I never know if I will be attacked. But I won’t let that silence me,” she added, recalling how an elderly white couple saved her life by stopping to pick her up.
Young said that after the police officers took her shoes and coat, they asked her whether she thought they were racist.

“Here I’m standing out on a dirt road with no shoes and you dare ask me that question? In that instant I lied. I answered ‘no’ because I felt threatened, if not then, another time.”

While trust in Canadian police has declined generally following widely publicized abuses, it is particularly low among many Indigenous people.

“I would never fault anyone for calling the police when their safety is in danger,” said keynote speaker Andrea Ritchie of the US-based INCITE: Women of Color Against Violence.

“But we need to figure out how to respond to violence that happens in our communities without involving the police.”

Some would say Winnipeg was an apt location for the International Copwatching Conference, given its history of the Red River Rebellion, the police killings of JJ Harper and Matthew Dumas, and widespread gang problems in the inner-city.

“Police are the largest gang in Winnipeg,” said presenter Greg Robson, who works in gang prevention among Indigenous youth. “The best way to approach it is to be a human being. Cops would do better in our communities if they took that approach.

“As far as gangs go, we can really work with the young people and find a positive resolution. I’m the first person to break the cycle of gangs in my family. An elder told me, ‘The secret to it all is to get young people back to their culture.’ I used to be extremely angry and violent. I had a lot of problems. Through my culture —sweat lodge and ceremony—I became comfortable in my own skin.”

“Each of us is struggling to reclaim our identity,” said Spillett. “Our weapons are speaking truth to power and working in solidarity with other Indigenous people.

“We need to understand and replace these instruments of oppression with peace and justice,” she added.

Despite many stories of abuse and misconduct by police, attempts to find solutions and solidarity permeated the gathering. Some said that breaking the silence on oppressive policing was a positive development.

“Yes, it was a bad thing,” midnight-ride survivor Alexus Young told Windspeaker after the conference. “But the Creator was preparing me for the here and now. I now have a voice and I’m silent no more.”