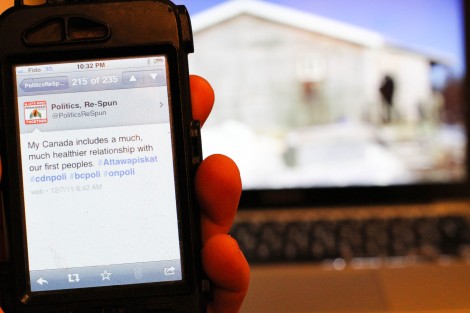 With winter setting in over Attawapiskat First Nation, a cross-country war of words got a serious “twitterjection” yesterday – from Vancouver activists who managed to more than double discussion of Indigenous justice on Twitter, and even got a nod from CBC host George Stroumboulopoulos.

It’s been nearly a month since Attawapiskat sounded a cry for help by declaring a state of emergency due to a major housing crisis which saw families in crowded tents in the snow and without sanitation — a cry that took weeks to be heeded by authorities.

Today, it was revealed that the impoverished community will be forced to pay $1,300 a day for a federally mandated private consultant in charge of its finances. In response, Indigenous leaders attempted to enter Parliament Hill yesterday, while others threatened civil disobedience and an oil pipeline blockade. The national leader of the Assembly of First Nations, Shawn Atleo, earlier declared the crisis Canada’s “moment of reckoning.”

Vancouver’s Stephen Elliott-Buckley, founder of the Politics, Respun blog, was frustrated with online and media discussions of Attawapiskat’s housing crisis – which he said unfairly blamed the community’s money management for the state of emergency, when in fact housing and poverty is a problem on First Nations across Canada and has systemic causes, he said.

Yesterday, the former Vancouver teacher launched an online action he dubbed “Occupy #Attawapiskat,” intending to reframe the conversation using#Attawapiskat hashtag (basically, its Twitter topic label). Gathering friends and Twitter followers (subscribers to his account), Elliott-Buckley began sending out a steady stream of roughly 285 tweets (messages) and retweets (repostings of others’ messages) — and the action spread.

“I wanted to focus in on positive, forward-looking actions about this crisis,” Elliott-Buckley said. “Instead of random comments (on the internet), I wanted to channel it towards talking about the broken relationship between Canada and First Nations across the country.

“The government is trying to put out the fire and move on. But we need to look at it on a systemic level – generations of abuse, neglect, and broken agreements. (I hope) people on Twitter who participated in the action take that out of the Twitter environment into their human networks where they’re more likely to carry the message more powerfully.”

While the action failed to trend on the micro-blogging website (trending is a list of the newest ‘hot’ topics being discussed, and Twitter only captures sudden ‘spikes’ in activity), Elliott-Buckley recruited many others to phone the federal government and share their thoughts on Canadian-Indigenous relations.

Meanwhile, in Ottawa, First Nations chiefs and leaders from across the country condemned the federal governments insistence on seizing control of Attawapiskat’s finances, and accusations of financial mismanagement and corruption — some marched to Parliament Hill demanding to meet Prime Minister Harper, but were turned away by police.

Gathering for a meeting the Assembly of First Nations (AFN), Attawapiskat Chief Theresa Spence insisted her band had spent money on housing, health care and community amenities – but the federal government had failed to heed months of warnings about their housing crisis.

According to former Neskonlith First Nation chief Arthur Manuel, who attended the conference representing his community, the entire convention gave Spence a standing ovation after her speech, and voiced their support for the community.

“I heard Chief Spence say that the situation in Attawapiskat is very critical,” Manuel told the Vancouver Observer from Ottawa as he boarded a plane following the AFN meetings. “She’d been calling the government, and saying it was an emergency for some time.

“Instead of responding to the impoverished conditions, they sent a third party manager in, accusing them of mismanagement. I know for a fact – I was a chief for eight years – you’re always underfunded, regardless of how you cut it.”

Manuel said even his own reserve has a housing shortage, which some have attempted to bypass by building cheaper structures like straw-bale houses. But the government’s blame for the shortage should not lie with the Attawapiskat community or Chief Spence, he said.

“They’re basically saying, ‘You’re managing your own poverty,’ and blaming her,” he said. “Generally, all the chiefs can really empathize.”

But Manuel — who has been involved in First Nations activism across Canada with Defenders of the Land as well as at the United Nations level – believes the roots of the crisis are hinted at by several high-profile calls to relocate the Attawapiskat First Nation. Former Prime Minister Stephen Harper advisor Tom Flanagan said some remote communities are no longer “viable” and should be moved by the federal government. Manuel believes that a large diamond mine on the First Nation’s territory might explain how a housing shortage became a war of words resulting in the community losing control over its finances – and possibly its future.

“That’s totally ridiculous,” he said of Flanagan’s call to move Attawapaskat. “Within their territory there’s diamond mines – De Beers (mining company) is there.

“When people say they should be moving out, the reason they want them out is to go in and take minerals out and not deal with the Native population who lives there. It’s a farce that these people are impoverished when there’s billions and billions of dollars of diamonds under their feet.”

Several twittivists (Twitter activists) participating in the Occupy #Attawapaskat action raised mining issues in their tweets (postings), drawing attention to the De Beers mine and questioning if it is connected to the government take-over of the community’s finances.

“Since 2008, a diamond mine operating near the community of #Attawapiskat -expecting to produce 600,000 carats of diamonds a year,” tweeted Ianik Wright-Larin, under the Twitter name @radiojagou.

But does sending a maximum-140 character message over the internet actually do anything to change conditions on the ground in Attawapiskat?

“It doesn’t,” admits Elliott-Buckley. “It’s a bunch of people sending 140 character tweets around. If the whole event started to get the (#Attawapiskat) hashtag trending, and then walk away, that would be useless.

“We wanted to focus the discourse about Attawapiskat on Twitter on fixing the broken relationship.
It has to do with crises on reserves all across the country — it’s part of a larger systemic problem.”

Elliott-Buckley said that the main goal is to broaden the reach of that conversation using social media tools, and that hopefully people will discuss the ideas in their communities.

“Twitter works in activism,” he said, referring to several books on social media activism. “It depends on people who happen to be on Twitter, but who are talking about it outside.

“(Such an action) concentrates people in a Twitter mob, who will participate in an action or event. But then they take that out of the Twitter environment, into their human networks. It’s more likely to carry the message more powerfully.”

Sarah Bjorknas, a local Canadian Union of Public Employees organizer and founder of the Vancouver catholic Worker house, took part in the Twitter action. She said it was an easy way to engage in conversations with a broad group of people – but that it still depended on personal connections to motivate her and others.

“(Elliott-Buckley) made it so easy for people to participate — gave them lots of ideas,” Bjonknas said. “In terms of social media activism action, it was really well-organized.

“I tried to focus my comments around people thinking differently. Of course, I appreciate (Twitter’s) limits – I know some people (…) don’t spend much time on the social media stuff. My philosophy is take every opportunity to communicate.”

Manuel agrees that more discussion needs to happen showing the housing crisis to be part of a larger problem.

“There’s serious housing problems on every reserve – there’s no question about it,” he said. “In Neskonlith, it’s that way. Low-income housing on an Indian reserve is hard to come by.”