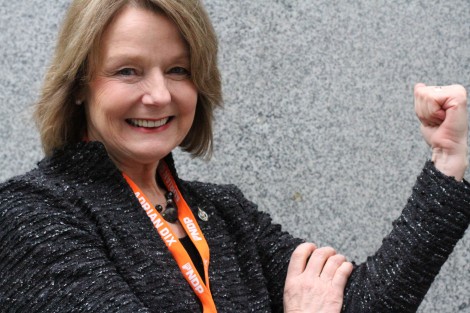 She’s been dubbed a “practical radical” – and even the “Iron Lady of the Left.”

Today, at an intimate pub gathering (the venue doubles as a night-time gay bar), she announced she will support national anti-homophobic bullying legislation, bring back a long-gun registry and fight for lesbian, gay, bisexual and transgender rights.

“I believe in this leadership campaign, if we’re going to talk about economic justice, we’ve also got to talk about social justice and human rights,” she told the crowd. “We have to fight for human rights — we have to defend the rights of everyone in society.”

And though the media seem to have already called the race as a two-way run between Brian Topp and Thomas Mulcair, many are looking to the party’s finance critic as an intriguing third option – someone who might bridge Topp’s progressive views and his closeness to Jack Layton, with Mulcair’s charismatic (though mercurial) personality and government experience.

When the Vancouver Observer sat down with her in another pub on Saturday, only hours before a federal leadership town hall, Nash, 60, laughed heartily – heartily, as in, a full five seconds – at the titles the media have assigned her.

“I think most people – especially young people – today don’t see things in terms of left and right,” she said, when VO tried to place her on the NDP spectrum. “I’m not sure it’s always useful.

In a political sphere where women are still categorized as either too tough (Thatcher, Hillary Clinton, Angela Merkel) or too soft to lead, Nash earned her strong image not only from going “toe-to-toe” with finance minister Jim Flaherty and then-industry minister Jim Prentice. In her years before becoming a member of Parliament in 2006, Nash was a chief negotiator with the Canadian Auto Workers (CAW) union – the first woman even to negotiate a major deal with the automotive industry – the 2005 Ford Canada pact.

If that doesn’t take steely resolve, try dealing with irate airport travellers. In a former life, Nash was an airline ticket agent. She speaks French, English and Spanish fluently. In the House of Commons, she’s put forward bills for a $10 national minimum wage, honorary citizenship for the Dalai Lama and – making Canadian history – blocked a Canadian company’s takeover by a U.S. arms manufacturer.

“I led the charge,” she said of the successful effort to stop the sale of MacDonald, Dettwiler & Associates (MDA), maker of the Canadarm, to a U.S. munitions manufacturer. “It was the first time in the history of our Competition Act.

“Once we examined (the deal), it became obvious even to the Minister (of Industry Jim Prentice) that it was not in Canada’s interest. I’ve also shown as finance critic I can go toe-to-toe with (Finance Minister) Jim Flaherty with gusto and effectiveness.”

Nash said that bridging her passion for social justice with knowledge of economics is a key to her campaign. And, with economic inequality at an all-time high in Canada, she insisted Canadians need to hear more clearly the NDP’s economic vision.

“We should never be afraid of talking about economic issues,” she said. “We are the party that wants to reduce inequality and create good quality jobs with decent incomes, and you can only do that if you have strong social programs and strong environmental policy – they all go together.

“Most people work really hard for their money and they want to make sure that the NDP understands that – which we do – and that we respect the tax dollars they send to Ottawa … The average person says, ‘Wait a minute – that’s my money. I want to know that you value how hard I worked for that.’ I think that in the next election, that’s our challenge – to demonstrate that that’s our approach.”

And though Nash seemed authoritative but somewhat matter-of-fact in discussing global economic instability, Canada’s export surplus, and joblessness solutions (safe to say, in fact, that she is extraordinarily confident on fiscal matters), she warmed up considerably on the debate stage and, most importantly, when interacting with the server bringing her coffee, who seemed excited by her campaign just from one interaction.

“Wow,” the server told me after. “She’s really nice. I’m not really a political person, but it would be so cool to have her as prime minister.”

She may be seeking the NDP leadership, but with the party rising in prominence since becoming Official Opposition this year, is she ready to take on Canada’s highest position of power?

“If you’re going to run for something like that, you’ve got to be prepared to win, and for what that means in terms of a much greater level of commitment,” she says with confidence, not breaking eye contact. “I have the capacity to get the job done.

No one could say this isn’t a tough challenge. Mulcair and Topp share a top-tier, garnishing impressive banks of high-profile NDP endorsements. Nash, for her part, has Victoria MP Denise Savoie, former federal NDP leader Alexa McDonough and Newfoundland and Labrador NDP leader Lorraine Michael, among the most well-known.

“The best endorsement in the campaign is the endorsement she received from Jack Layton when he named her senior finance critic,” said Duncan Cameron, president and columnist with Rabble.ca, attending her pub event. “It’s the senior position in the caucus, and makes her the first woman opposition finance critic (in Canada).”

When Jack Layton phoned her to offer her the coveted finance critic portfolio, Nash said he seemed as excited as she was by the appointment, especially considering the NDP’s opposition status.

“I knew Jack was thrilled offering it to me,” she said, chuckling. “He asked me if I was sitting down when he offered it to me!

During a full hour she spent with the Vancouver Observer, Nash fielded questions on topics as broad-ranging as Quebec self-determination, nation-to-nation talks with First Nations, and reviewing free trade agreements and fighting for human rights and the environment in any future ones. (Read more below).

She becomes most animated when discussing the Occupy movement – the catch-phrases of which have entered the leadership debates from many candidates, with rejoinders about “the one per cent” and financial speculation.

Nash, too, raises the Occupy question.

“(Occupy) is something that got people excited,” she said. “People were standing up and putting a spotlight on those who have caused the economic insecurity really having got away scott-free. Those who paid the price were left suffering the consequences.”

While it is unclear whether Nash has a shot at party leadership – she’s still not widely known, nor carrying some of the backing of other top-tier candidates – some speculate that, with the party’s preferential ballot, she may at last-moment and come up the middle of Topp and Mulcair in the final count. Milling about at The Helm – by night a gay bar, by day a lounge – Nash weaves slowly through a crowd of 75, about three-quarters of whom seem less than 30, many wearing freshly minted rainbow-emblazoned ‘Queers for Nash’ shirts. She smiles as she takes the floor, and the bar hushes.

“I’ve sat across the bargaining table across from some pretty tough companies,” she said. “But I’ll tell you — the gains that have given me the greatest satisfaction are gains around equality issues. 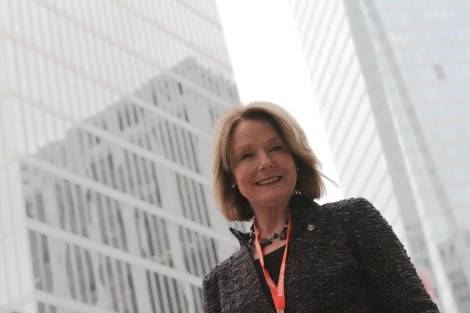 I think it was a terrible mistake under the Liberals that they abandoned the national housing strategy. We have a situation, for example (…), the situation in Attawapaskat – the First Nations reserve where people are living in completely inhumane conditions – and I know they’re not the only community in that situation.

Plus you have many people who live in urban settings who are either paying way too much of their income, and/or they’re living in grossly substandard accommodations. In a northern country, we need to make sure everybody’s adequately housed – and that would go such a long way to taking people out of poverty, if their housing needs were taken care of.

We’re a trading nation – we should be doing what we can, obviously, to promote trade with other countries, but it’s gotta be fair. It’s gotta be based on all parties getting a decent deal out of it, and it can’t be subsidized on environmental degradation or human rights abuses.

Trade agreements – like any agreement – are not a force of nature. They are negotiated by people. And I think it’s fair, after a period of time, that there be a review so that agreements can be modernized so they can be in the best interests of their citizens.

If somebody had said even in a year ago that Europe would be reviewing whether or not there’s going to be a Euro – these are not forces of nature. I’m not campaigning to open up trade agreements, but it is an important approach that when Canada’s bargaining trade agreements, that we get agreements in the interests of our country.

We have to approach negotiations on a nation-to-nation basis. We have to respect the nationhood of our Aboriginal peoples, and we can’t engage in a way that perpetuates a colonial approach to Aboriginal people. We have to approach discussions, negotiations, from a position of respect and equality. I think that, from the start, makes a big difference, but I don’t think it’s up to government in Ottawa to figure out what all the answers are. First Nations people know very well what a lot of the solutions are.

For the first time – certainly in my lifetime – we have the opportunity for progressives in Quebec and progressives across Canada working together to build a better country. The next leader has to carry on with Jack’s work to be somebody à l’écoute (in touch with), listening to Quebeckers – but who also understands that fundamentally, what most Quebeckers want is what Canadians want.

They want decent jobs, they want their kids to expect to have at least as good a standard of living as their parents, they want to be able to retire in security.

I hope that we don’t need a new referendum because Quebeckers feel that their aspirations – their economic, social and environmental aspirations, and their aspirations around respect for Quebec history, culture, language – are respected. And I believe that’s what we need to work for. You know, I believe in Quebec’s right to self-determination, and I support that. But I’m going to do absolutely everything in my power to work with Quebeckers and with people in the rest of Canada to show how we are all better off when we work together.

I’ve done a lot of women’s leadership training, I’ve done a lot to overcome the barriers to getting involved. On our part, (the NDP does) a better job – we’ve got 40 per cent women – because in our constitution we have a requirement that we have to have equity representation in nomination meetings. If we hadn’t had that, I might not have had the opportunity to run when I first ran, when Jack recruited me, because there was another person who had been working in the riding but they didn’t have an equity candidate.

Nash on merger or cooperation with the Liberal Party of Canada: