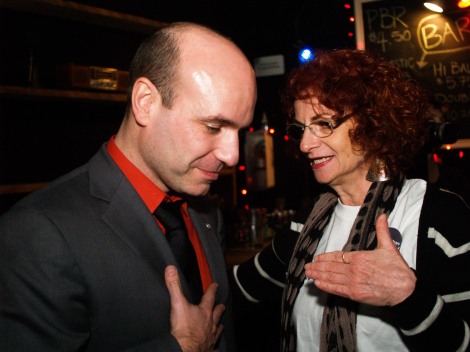 He may not yet be seen as a front-runner in the New Democratic Party’s race to replace late leader Jack Layton, but Smithers, B.C.’s Nathan Cullen has been turning heads lately – both for his controversial proposal for electoral cooperation, and for his high-profile opposition to the equally controversial Enbridge Northern Gateway pipeline.

On Friday, the longest-serving Member of Parliament in the party’s leadership race will speak before the pipeline’s joint review panel. At a campaign fundraising concert in Vancouver last night, attended by 100 local supporters, Cullen turned a few more heads with his non-stop dance moves; by 10:30 p.m., the father of two 17-month old twins was still on the dance floor.

Last weekend, the four-time elected politician sat down with the Vancouver Observer to talk about his leadership bid, his controversial positions, and his vision for a green economy.

Firing up talks for electoral reform

“We need a one-time offer to get into government and change the voting system.

“I’ve suggested that we have run-off elections before we have campaigns in Conservative ridings. That’s a very post-partisan, evolved kind of politics – it’s hard for people steeped in partisanship to come to; you’ve got to ease them into the conversation. But it guarantees a cooperative or progressive government.”

His vision for electoral reform isn’t fully fleshed out yet — “Some form of mixed member proportional representation – something that says, ‘When you vote, your vote will be reflected in the parliament’” — but Cullen said that his campaign is about starting a conversation, not ending it.

Fellow candidate Peggy Nash countered his proposal this week, telling reporters that cooperating with other parties would force voters to choose parties they might not support.

“What it would mean is it would deny a democratic choice to Canadians,” Nash said.

“In ridings where his plan would be in existence, (they) would not be able to vote for the party of their choice.”

Elected in 2004 for the Skeena-Bulkley Valley riding, Cullen has faced his share of challenges – and good luck – over the years. The 39-year old small businessman represents a gigantic riding the size of Norway, covering the communities of Prince Rupert, Terrace, Kitimat, Smithers and Haida Gwai. The riding includes significant Indigenous populations, as well as many communities reliant on mining and forestry jobs.

Describing himself as “pro-business” and “environmentalist” — and someone heavily inspired by elders in First Nations communities throughout his riding – Cullen hopes to show that economy and environment are not mutually exclusive.

“Coming from a small business background, I’m as comfortable in rooms with business types as with environmentalists,” Cullen said.

“Canadians are looking for a bridge – the false choice between jobs and the environment is killing us.”

What Cullen offers, he said, is a vision of how NDP can win the confidence of Canadians with a few key values: “Confidence with the economy, openness to progressive business, a modern and progressive tax plan, demonstrating how the environment and economy are intertwined.”

Electoral cooperation is not Cullen’s only unique platform among the NDP leadership contenders, nor is it his only attempt at political reform. In 2005, he introduced a private member’s bill to lower Canada’s voting age to 16. He created an initiative for youth to develop legislation which he introduced to Parliament.

“I see too many politicians just giving young people platitudes – but they don’t really listen,” Cullen said. “How can we demonstrate that we’re listening and acting upon the hopes of young people? So we created a context that allowed young people to be involved.

“We need to innovate. I’m not into politics – I’m into the business of ideas.”

Opposing Enbridge
And while policy and vision are important, Cullen admits his political fortunes have had the benefit of some luck – perhaps even the blessing of Mother Nature. During his first election run in 2004, Cullen’s campaign swelled after an 6.7-magnitude earthquake drew attention to his support of a federal moratorium on offshore oil and gas drilling, which was opposed by other his competitor.

The convergence of social movements and First Nations against the Enbridge pipeline is another example of an unexpected confluence of events during a political campaign. Cullen, a prominent opponent of the project, is one of the most vocal among the NDP against the project.

“It’s a convergence of stars,” Cullen said. “It’s a perfect convergence to have – it puts Canada at the crossroads of what kind of future we want.

“(The pipeline) locks us into a certain path – the oil sands – and it locks us into a raw export economy. This one’s a loss for the environment and the economy. It’s all in one project – it’s a storm Enbridge never expected.”

Turning to the subject of Prime Minister Stephen Harper, Cullen said that he and Natural Resources minister Joe Oliver‘s accusations of “foreign-funded radicals” among pipeline opponents ramped up opposition to the project.

“Real fuel was thrown on the fire by Harper labelling everyone a radical,” he said. “That really got people upset.

“It’s not just labelling people radicals – they’re going to go after charitable groups that oppose their views. They’re making it a war between civil society and government. These are not your grandparents’ Conservatives. They’re much angrier, more sinister about their politics. They see conspiracies everywhere, under constant threat even when they’re in power.”

Breaking the ranks
Cullen has some positions unconventional for the NDP. Although he voted today against scrapping the federal long-gun registry, he also opposes the criminalization of rural gun-owners, telling the Vancouver Observer that moving from urban Ontario to rural B.C. in 1998 taught him a lot about the issues of farmers and hunters.

He’d limit the use of party whip to discipline dissident members of the party to a few core values issues, such as “a woman’s right to choose,” and confidence motions.

“It’s a blunt instrument; it’s very harsh,” he said. “It can have unintended consequences. It’s a form of leadership but it’s certainly not my preferred one.”

Ultimately, Cullen has staked his candidacy on some unconventional proposals, a willingness to risk controversy, and a youthful campaign energy. But at his fundraiser concert this week, it wasn’t only twenty-somethings (though they made up perhaps 90 per cent of the crowd).

“Nathan’s a down-to-earth, principled person,” said 25-year NDP member and Cullen supporter Ren Morley at the campaign event. “He’s articulate, intelligent, and knowledgeable. It all works for him.”

When asked if he supported Cullen’s controversial proposal for election cooperation with the Liberals and Greens, Morley paused.

Cullen admits cooperation goes against ingrained partisanship, especially as the NDP has risen into Official Opposition – bringing it closer than ever to governing.

“I get it, I get why people resist it,” he confessed. “But it’s also the politics I learned in northern B.C.

“If I ran rabidly partisan campaigns, I would only get 17 per cent of the vote. Our campaign found common ground and built up from there. The progressive majority in this country has common-ground issues: affordable child care, the environment, women’s issues, restoring our place on the international stage.

Some of those are shared across people who vote NDP, Liberal or Green.”