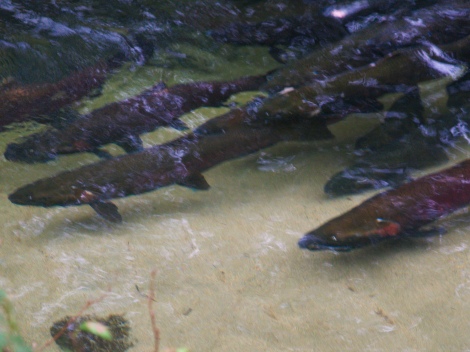 Salmon near a B.C. hatchery. Photo by David P. Ball

With salmon numbers in B.C.’s once-abundant Fraser River stocks predicted to take another devastating hit this summer, some are questioning why First Nations are under-represented in managing a fishery that has become almost exclusively theirs.

Indigenous communities are allotted roughly a million fish for food, social and ceremonial (FSC) uses. Canada hopes to reserve another million for upstream spawning beds. With only 2.1 million sockeye salmon expected, according to pre-season guesses, experts are predicting another Aboriginal-only harvest with commercial boats tied up at dock again this year.

“Here we have the majority of Fraser River sockeye being harvested by Aboriginal people,” said Ernie Crey, senior policy advisor at Stó:lo Tribal Council. “But nearly everyone in charge of managing those fish are non-Aboriginals.

“I don’t get it. Why are sport and industrial fisheries’ interests advising the department about Aboriginal fishing? Why are predominately white people put in charge of managing what is now mainly an Aboriginal fishery?”

Crey suggested it’s an example of “systemic or institutional racism.” With only one full Aboriginal commissioner on the Canada-U.S. Pacific Salmon Commission (PSC), and three seats on that body’s Fraser Panel, Crey is not alone in calling for the Department of Fisheries and Oceans (DFO) to re-examine who is in charge of decisions.

“There’s definitely been views expressed by First Nations that they’d like to see increased participation in the process,” said Les Jantz, DFO’s acting area director for B.C.’s Interior. “That has actually occurred over a number of years. There’s been a progressive increase in representation. It’s an ongoing thing the department is dealing with.”

But with “representatives from all sectors, including First Nations” on the Fraser Panel, Jantz said, the DFO already seeks input and weighs the often-competing interests of conservation with commercial, recreational and Aboriginal fisheries.

On June 4, B.C.’s Supreme Court upheld a $300 poaching fine against nine fishermen, including BC Conservative leader John Cummins. In May, his party polled at 19 per cent, after gaining its first seat with the defection of MLA John Van Dongen from the BC Liberals in March.

Cummins and B.C. Fisheries Survival Coalition spokesman Phil Eidsvik were charged with setting gill-nets in 2002, a protest against DFO permitting only Aboriginal fisheries.
“We’re disappointed the court held race-based law enforcement is appropriate in Canada in 2012,” Eidsvik told reporters after the ruling.

But Stó:lo Grand Chief Ken Malloway, who sits on the PSC, as well as the First Nations Fisheries Council, said no conflicts are expected.

“I’m not anticipating any problems,” he said. “We fought with commercial fishermen for years about what the courts were saying, but mostly they acknowledged that the law came down on our side.

“They’re fishing now and catching fish we’re conserving,” he said. “DFO falls over themselves to try and please recreational fishermen. There’s 300,000 of them – and they vote.”

But DFO insists it considers various stakeholders.
There is not always agreement among groups when fisheries are permitted, as to what impacts should be allowed from one fishery or another, said Jantz. “But based on the allocation policy the department has, all harvesting sectors are aware of priority access First Nations do have.”

That priority was upheld by Canada’s Supreme Court in its Sparrow case, ruling that unjustified restrictions on Aboriginal fishing infringed on constitutional rights.
Pre-season estimates have pegged sockeye returns at between 1.2 and 3.8 million and more dire than 2009’s 1.5 million, which led Canada to launch the Cohen Commission, which concludes its salmon inquiry on Sept. 30.

“The return this year is forecast to be lower than average,” Jantz said. “That’s reason for concern.
“The main reason for the forecast is because we had a considerable mortality during the brood year due to warm water conditions, which often happens in the Fraser River. We had a number of systems experience the lowest-expected spawners for decades in those systems. . . We are hopeful we’ll have enough fish to at least meet (Aboriginal) food, social and ceremonial needs.”

For Crey, the tragedy of the collapsing salmon stocks will hurt Aboriginal cultures. He jokes that some consider him the “Attila the Hun on the Fraser River” for his outspoken views, but that his main concern is cultural survival.

“Entire Aboriginal civilizations in British Columbia were built around salmon,” he said. “It’s a legacy that’s been handed down from our forebears, and it’s been central to my life and my family.

“I’ve seen the fish themselves go into sharp decline. If they continue to play their vanishing game on us, the culture of my people, and the other tribal nations along the Fraser River, will be entirely transformed. I know what happens to societies whose cultures are lost. . . Once they lose something so central – so iconic – to their lives, then it’s not a pretty picture.”

A dead salmon near a fish hatchery in B.C. Photo by David P. Ball