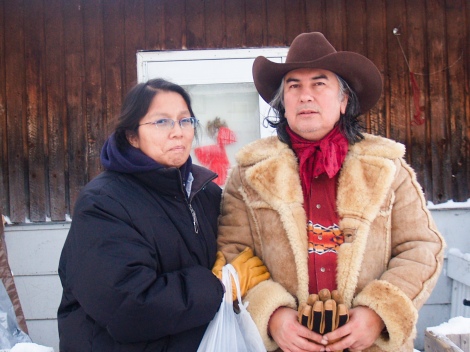 One-fiftieth of a teaspoon of mercury is all it takes to poison a 20-acre lake.

Decades after Dryden Chemicals dumped 10 tonnes of the neurotoxin into northwest Ontario’s English-Wabigoon River in the 1960s, Aboriginal communities are literally reeling from its effects.

“I get dizzy spells where I fall down,” said Judy Da Silva of Grassy Narrows (Asubpeeschoseewagong) First Nation. “I’m on mercury disability. I use a cane to walk… I used to have fainting spells, too.

“My symptoms are not as severe as some people’s. Some people shake when they grab something. It deteriorates your body, so by the time you’re 60 or 70, you become very disabled. . . There’s been a couple children born with cancer in the brain. I feel it’s connected to the mercury.”

On June 6, Da Silva and 33 others arrived at the legislature in Queen’s Park in Toronto, demanding Ontario address their concerns. Mercury has been found in her community’s fish, also eaten by White Dog (Wabaseemoong) and Wabauskang First Nations.
Da Silva travelled by train, but six walked the entire 1,820 km trek. Hosting a fish fry, they demanded the government apologize, fund monitoring, clean up their rivers, and compensate those excluded from an existing Mercury Disability Board (MDB) fund. They also called for an end to logging on their traditional territories.

“The government is not addressing the issues,” Da Silva said. “It’s a really shameful way of governing people.

“I feel they could still rectify it by respecting the things we’re asking for. . . They are responsible for the poisoning of our people, because they give these huge industries the permission to dump these things and to continue poisoning the waters, and to continue destroying the forest.”

Joined by several hundred Torontonians, the delegation invited officials to eat fish caught back home, served by a waiter at reserved place settings.

Aboriginal Affairs Minister Kathleen Wynne was the only politician who took up their invitation, and addressed the group. She promised to start a “conversation” and launch a committee to look at their concerns. Her schedule prevented her from staying for the fish, she told Windspeaker.

“This contamination should never have happened,” she said. “We’ve acknowledge there’s a burden of responsibility on our government.

In 1986, the government established the MDB, spending $15.6 million on compensation. But there are substantial differences between Health Canada’s mercury criteria – used to evaluate claims – and the research of Japanese scientist Dr. Masazumi Harada.

Harada – who died of leukemia on June 11, only days after the publication of his final Grassy Narrows report – found mercury poisoning to be higher than Canada admits.

His story is profound for both health sciences and Grassy Narrows. Researching Minamata Disease, an advanced form of industrial mercury poisoning, Harada visited the reserve in 1975, returning in 2004 and 2010.

He found that 79 per cent of residents originally tested had developed Minamata. But 59 per cent of 160 people tested in 2010 had symptoms of mercury poisoning, even those born long after Dryden Chemicals closed – and despite mercury levels lower than Health Canada’s thresholds.

“I was a little girl at the time,” she recalled. “I remember them coming. . . I just remember these Asian people cutting my hair. They’d take a piece from the top of your head.

“I feel thankful for Dr. Harada’s report and his study, because it affirms our feelings about the poisoning.”

Hunter, fisherman and trapper Shoon Keewatin remembers Harada’s visits too, and though he was too young at the time to fish, he recalls the government’s fishing ban.

“People who got most of their food from fishing had to stop,” he recalls. “It really broke the spirit of some of the fishermen.

“That’s when the drinking really started to be heavy in the community, when they couldn’t go out fishing.”
Keewatin still fishes, but his health prevents him from hunting.

“I used to hunt moose and deer. I used to stalk them in the bush, in the wintertime, following tracks in the snow. I’d sneak up on a moose or deer, but that’s hard to do when you keep on grabbing branches and swinging them in the air to stop myself from falling down.”

Despite his Minamata symptoms, the MDB rejected Keewatin’s application, declaring he did not qualify for mercury poisoning compensation.

Da Silva hopes her voyage to Toronto will bring change, but her community has been protesting for years.
Perhaps now Aboriginal Affairs will listen.

“I honour Katherine Wynne for having the guts to come and stand out and talk to a whole bunch of us,” Da Silva said. “The poison doesn’t stop in Grassy. It shouldn’t be just our fight. It should be everybody telling the government to stop.”