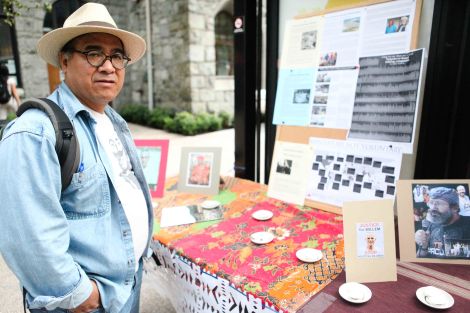 Several dozen people set up a memorial for slain anti-mining activists near the headquarters of Vancouver-based Goldcorp yesterday, highlighting what they said is widespread human rights abuse, ecological damage and health affects triggered by resource extraction by Canadian companies.

The group Mining Justice Alliance (MJA) — including a number of people from communities in Latin America and Asia impacted by Canadian-owned mines — demanded that companies extracting resources be held accountable for the impacts of their operations, which they said are often linked to violence and community divisions.

A representative of the group, which spent the afternoon hand-delivering letters outlining their concerns to the many mining companies headquartered in downtown Vancouver, told The Tyee that their goal is “to end unjust mining,” but also to honour the victims of violence associated with the industry.

“We are resisting the exploitative practices of the mega resource extractive industry, and showing solidarity with communities impacted by the Canadian extractive industry… throughout the Americas,” said the MJA’s Beth Dollaga. “Part of the event is to remember the activists who worked side-by-side with the indigenous people martyred… but also to remember and carry on where they have gone.”

As part of the memorial, photographs of anti-mining protestors killed near several Canadian mines in Latin America were erected near Goldcorp’s headquarters on Burrard Street. The activists had delivered letters to Goldcorp, as well as Fortuna Silver, First Majestic and Barrick Gold.

The activists expressed particular outrage after Fortuna Silver threatened to phone the police, and ordered eight security guards to evict the group from their offices. The Vancouver-based company — which operates a controversial mine in Oaxaca, Mexico, where several activists have been assassinated amidst rising tensions — refused to formally acknowledge receipt of the MJA letter, despite the fact that other companies had signed or stamped the group’s document.

“We’ve taken the letter,” said a representative of the company who would not provide his name, after scolding the staff person who unlocked the office door. “We’re not going to sign anything.

“Leave the letter on the counter… We do not stamp or sign any letters that come to the office… That’s our policy.”

For one labour organizer from Oaxaca, being removed from Fortuna Silver’s offices without an official receipt of his letter was shocking.

“I feel really upset,” said Raúl Gatica, with the Agricultural Workers Alliance and Oaxaca solidarity organization CIPO. “Because when those Canadian companies arrive in our communities they are smiling and friendly, and our communities open their hands to say, ‘You’re welcome in Oaxaca.’

“Soon, they start to exploit our resources and take the gold, silver and the resources we have. But when we visit them to inform them what’s happening there… they won’t even stamp our letter… So they’ll take the gold, but they won’t take our letter informing them? They don’t want to know what’s happening there. It’s a strange thing for Canadian people, who are fair and are friendly.”

Many of the companies accused of links to human rights abuses say they are not responsible for violence in communities near their operations. Most have corporate social responsibility policies, which generally mandate support for local development, community consultation and environmental assessment.

For example, Fortuna Silver’s website states that the company is “committed to creating sustainable economic value for our employees, their families, the local community and society at large. Our goal is to collaboratively improve the quality of life in ways that are both good for business and human development in the countries where we operate.”

One of the most controversial examples of resource extraction is the Marlin Mine in San Marcos, Guatemala, operated by Glamis Gold, which was bought by Goldcorp in 2006. A number of prominent critics of the Marlin project have been assassinated as tensions escalate in the community. A year before the purchase, 23-year-old mine opponent Alvaro Benigno was allegedly killed by two security guards employed to protect the Marlin mine. But after Goldcorp’s acquisition, the tensions continued. In July 2010, Diodora Antonia Hernandez Cinto, a prominent environmentalist and opponent of Goldcorp, was shot in the head by would-be assassins and survived.

A spokesperson for the company denied responsibility for conflicts around Goldcorp’s operations, and emphasized that the firm has helped build a medical clinic, school and other development projects in hopes of projects continuing long after the mine’s eventual closure.

“We are trying very hard in terms of consulting with the community,” Brent Bergeron, vice president of corporate affairs, told The Tyee. “We understand the concerns about what is going on. We invest quite a bit at the local level, in terms of economic development.

“We’re an extremely responsible company when it comes to making sure all legal activities are done around the mining operation. I’m not sure exactly what incident we’re talking about. We encourage the different authorities — the local police force or the attorney general — if there is some type of activity that we consider to be illegal, that we make sure that is being investigated… The company is not responsible for anything like that.”

He suggested the violence and conflict in some communities might be the work of outside agitators, not locals.

“In any community, there will be some divisions in terms of what is going on,” Bergeron added. “It’s not necessarily linked directly to a project or an activity… We don’t expect everybody to always agree with it. But we also see a lot of issues coming up that have to do with people who don’t actually belong to the communities — who are actually from outside — where that, in itself, may sometimes fuel some of the conflicts.”

‘They have broken communities’

“They have broken communities, because before any mining company arrives in our communities, we resolved our problems in assemblies or talking to each other,” Gatica said. “But when the mining company arrived, violence started. Leaders were killed, and problems were created that never existed in the community. They are not solving the problems, they’re creating problems.

“Before starting any business, they have to consult with the communities living in the area. The community has to participate — and organizations, environmental groups and experts — to do a proper analysis of the environmental impact where the mining company wants to establish themselves. Will it be sustainable or not? Will it be helpful or not?”

The Vancouver vigil and letter-deliveries were part of coordinated events across the hemisphere, with protests in El Salvador, Mexico and Colombia.