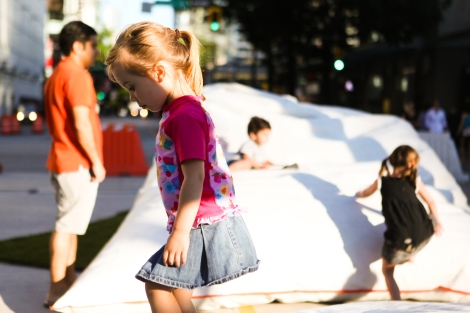 Before Pop Rocks could even have its official launch Wednesday, the caution tape was torn down and the recycled plastic blobs overrun with playing children. Photo by David P. Ball.

When the designers of a new Robson Street installation arrived for their grand opening Wednesday, they found their yellow caution tape already torn down, and their amorphous, misshapen white blobs literally covered in people.

Some artists might consider it a disaster: no speeches, no symbolic ribbon-cutting, no laudatory acknowledgement. But in the case of Pop Rocks, a three-week interactive collection behind the art gallery, the public’s enthusiasm for the project was exhilarating.

“In a sense, they just sort of moved in when we left to change our pants!” laughs Joe Dahmen, with AFJD Studio and an assistant professor of design and sustainability at UBC’s School of Architecture and Landscape Architecture.

“We had all the caution tape up, we’d wiped them all and fluffed up the pillows,” recalls another of the Pop Rocks creators, Matthew Soules, another UBC architecture assistant professor and owner of an eponymous architecture firm. “We left to go home and change.

“We were going to come back, take the tape down, and unleash it. As I approached the site coming up Hornby, I could just see one of the taller forms, and I saw a child with a mother, playing on it. Just two people went under and played on it –- no big deal. But when I turned the corner, there were like 200 people. I guess it already opened!”

Partnering with a third designer, Emily Carr University associate professor Amber Frid-Jimenez, also a founding partner at AFJD Studio, the trio crafted a dozen soft bean-bag chair-like forms -– but up to five metres long –- out of the recycled old sails of Canada Place, stuffed with recycled industrial polystyrene on loan from a plastics factory.

Their vision: a thought-provoking hybrid of art, architecture, sustainability and social statement that would be comfy enough for Vancouverites to lounge upon, share snacks, bounce and slide down, and meet one another. When the installation comes down, it won’t be sent to the dump, but rather redistributed to community centres and spaces.

“People have adopted a love for this thing,” Soules told The Tyee, as we lounged with the project’s creators on one of the plush plastic mounds. “It was successful for that.

“They just broke through and started occupying it in ways we couldn’t have imagined!”

A few metres away, one of the taller Pop Rocks — more than a metre high — is covered in about five children. Two of them haul a third up by the feet, suspending him upside down. Another child slides down the other side, as a full-grown bearded adult leaps onto another form nearby as if it were a trampoline. A mother watches comfortably from under an umbrella’s shade, seated on one of the lower Pop Rocks.

“Is this an art project?” she asks. “It looks really cool.

“I like the umbrellas for shade, and people walking around. (The kids) seem happy. There is quite a bit of (public art in Vancouver), but this is very unusual and different. It gives a funner, funkier, up-beat feeling. It’s not something you see anywhere else.”

Set up from Aug. 15 until Sept. 3, the Pop Rocks opening featured a live DJ spinning records, and gave visitors a chance to meet the architectural experiment’s designers. Even the suppliers of the polystyrene foam pellets giving the installation its soft texture were on hand, lying back on their own reconfigured products.

“It’s a good use of the recycle expended polystyrene,” says Hussam Kaddoura, from Mansonville Plastics Ltd. (MPL), lounging in the shade with his wife, Duaa Riyal, and co-worker Jack Liu. “It’s great to see they have a new way of using waste material — to have a new life for it.

“It’s like we’re in a living room here – usually people use bean bag (chairs) in their living rooms. To me, it’s a very comfortable environment for people to sit and relax.”

One thing Soules has noticed about Pop Rocks is the difference between tourists’ and locals’ reactions to what he describes as the project’s “undersea, pulpy, kelp-like” shapes. Tourists, he observed, tended to be remarkably accepting of bizarre public art. The locals took some convincing, it seemed.

“When locals learned it was the fabric from Canada Place, something clicked,” he told The Tyee. “A light went off, and they said, ‘Wow! It was really the fabric from that iconic sail structure and found its way here?!’ It embedded it in the local reality — it made something foreign more familiar.”

‘Something to do with being provoked’

Not all the reaction to Pop Rocks has been positive, Soules added, but the project in fact aims to provoke both comfort, and also difficult questions about our city.

“Over the course of the day, as the installation progressed, it was the cranks and naysayers, saying, ‘They look hot and uncomfortable,’ ‘These are just beds for homeless people,’ ” Soules recalled.

“People were like, ‘What happened to the tables and chairs?!’

“It provokes a kind of questioning, an engagement with the city. We get so used to things being a certain way, it’s so easy to become blasé. When you come across something that doesn’t fit into regular categories, it’s invigorating. How does Vancouver — how do all cities — become increasingly dynamic, increasingly inclusive, increasingly sustainable? It has something to do with being provoked.”

And while Pop Rocks, on the surface, is mainly about creating a creative, comfortable public space — using only sustainable, re-used products — the larger questions about economic class and politics loom large in the creators’ minds.

In fact, they said, even after the City of Vancouver approved their proposal as part of its Viva program — an Engineering Department effort “creatively transforming streets into vibrant public spaces,” according to its website — the city was concerned about the Pop Rocks being a little too comfy.

“Anytime you put something soft out in public, there’s an issue with homeless people,” Dahmen said. “Who is this really for? To me, it’s actually exciting that different demographics will use it in different ways.

“Part of the struggle of trying to offer a place of respite, slow-down, soft landscape where people could experience the city and each other in a different way, was born out of a desire to address some of those same issues…. In a way, that’s a radical notion of the project…. (Urban theorist) Mike Davis and others have pointed out the not-accidental adoption of measures to keep people from being too comfortable in public.”

Slowing down the centre

In fact, when renowned Vancouver architect Arthur Erickson was hired to design Robson Square in the late 1970s, it was hoped that the new space would deter the mounting social protest movements of the era from gathering in large numbers, Dahmen said.

“We have a plaza that responded to the social organizations of the sixties — and a reaction to protests that happened in public space,” he explained. “In a certain sense, those concepts of preventing public unrest were operative in the design of this area.

Pop Rocks isn’t just for kids. Here, a man uses one of the foam-filled bags as a trampoline. Photo by David P. Ball.

“A highly capitalist city really wants to be about flows and vectors going from one place to another. If people just slowed down, sat down and had conversations, they might not be buying as frequently to put it in really simple terms.”

Indeed, the city’s concerns about Pop Rocks attracting street people looking for a quiet, soft place to lie down and some shade from the sun is precisely one of the social-inclusion questions most pressing for its designers.

“Everything has politics embedded in it,” Frid-Jimenez says. “The city … didn’t want it to be so comfortable; they were worried about it attracting a homeless population.

“Slowly over time, we were able to have a dialogue about that, and say, ‘Well, really, there are so few places where you can create an intimate space in the middle of the city — where you can be outside in public, and yet it’s soft and intimate’ … We used the environmental interest of the city to make that happen. We’re very devoted to the green aspects of this project … but that opened the door for us to then deal with other questions that are much more difficult, like providing comfort in the city in a public space.”

And yet — for Soules — the chance to create a temporary work in a space designed by an architectural guru like Erickson (who, it turns out, was Soules’ first employer after graduation) is also an enticing opportunity.

“This installation aims to be radically inclusive. We did think about children and how the very young would be drawn to the mysterious shapes — they could play on them… (But) you notice the forms are raised to varying heights — we gave thought to how a very young person to an elderly person could still find a place to sit here. It was always our hope that this would be inviting to as large a group as possible.”

When the project wraps up Sept. 3, an unseen aspect of Pop Rocks will begin — 19 stories up in a neighbouring office tower, a low-resolution camera is creating a sort of graphic map of how people use Robson’s 800-block, and whether that changed. Without any personal data involved, the blurry, colourful image produced by the camera will help designers learn about how we interact with our urban environment — and each other.

With most spaces downtown made of hard stuff — concrete, metal and glass — the presence of soft, foamy towers in the heart of the city might help reassess how cities are designed, and how people might interact differently.

A small child scrambles over another Pop Rock across from us, as several others bounce atop the unusual mountain of foam and recycled sails, seemingly unaware that this is anything out of the ordinary.

“It’s so raw and immediate. I think that’s one of the appeals, and why kids are so drawn to it…. These soft pillow forms are very unexpected in a city core. The recycled materials have this magical effect, to produce this other-worldly, dream-like landscape — to radically transform the centre of the city and make it into a playful, delightful (thing). And, as you can see, it’s working!”