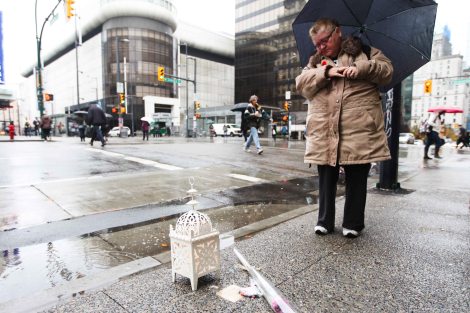 Lori-Ann Ellis, whose sister-in-law Cara’s DNA was found on Robert Pickton’s farm, looks at the first of 62 memorial plaques throughout Vancouver. Photo by David P. Ball

Family members of missing and murdered women lauded the first of 62 bronze memorial plaques for their loved ones installed yesterday on Vancouver’s streets.

A small gathering of dignitaries and families spoke of the need to change policing and social attitudes towards sex workers, only four days after B.C. granted an extension to the beleaguered Missing Women Commission of Inquiry’s Wally Oppal to file his final report on the Robert Pickton murder investigation.

And while they may only measure four-inches square, the humble bronze squares will serve as a reminder of the importance of protecting marginalized women, said Lori-Ann Ellis, whose sister-in-law Cara’s plaque was unveiled at Georgia and Granville, where she was last seen.

“Every day in our country, and around the world, women go missing,” she said, as other women’s family members wept and comforted each other nearby. “These plaques are to make people pay attention.

“It’s a way to make people question things, […] to make people accountable. The plaque is a sad reminder of what can go wrong when good people, who have the power to make a difference, look the other way.”

For Sean Kirkham, director of the Canadian Foundation for Creative Development and Innovation (CFCDI), the organization which commissioned the plaques in consultation with missing women’s families, the memorials will honour the memory of women like Cara Ellis, whose DNA was found on serial killer Pickton’s farm.

“The Living Memorial Stones Project is based on the notion that cities need to attend to their emotional landscape via their physical landscape,” he told the gathering. “This art installation serves as an example of a living, personal reminder, because it commemorates where the terror began — in most cases where these women were last seen or where they once lived.

“It makes it clear that these women were individuals, and gives names to the deceased to keep their memory alive.”

Addressing the gathering, BC New Democrat leader Adrian Dix said the plaques are a warning against dismissing groups of people as expendable or less worthy of protection in society.

“This memorial is a living memorial that’s going to be throughout this city,” he said. “It’s going to make a difference.

“We need to remember, and we need to place the focus on what matters: […] those that lost their lives when they shouldn’t have. This is a community recognition that change needs to happen. It’s hopefully a living reminder of what can happen when we don’t speak out for one another, when some people are seen as not being our brothers and our sisters.”

Vancouver Police Chief Jim Chu attended the first stone’s unveiling with several other high-ranking officers, and reiterated his department’s apology for the way it handled the missing women’s investigations, where family members say they were rudely dismissed by police when they reported loved ones missing.

But families continue to blame police and government for failing to protect vulnerable women.

The missing women’s commission held eight months of hearings ending this summer and was granted an extension last Thursday, allowing Commissioner Oppal an extra month, until Nov. 30, to complete his final report on what went wrong with the missing women and Pickton investigations.

The inquiry itself came under repeated criticism, starting with the province’s refusal to fund community and human rights organizations’ participation, and leading to a mass boycott by groups such as Amnesty International, the Assembly of First Nations and the Downtown Eastside Women’s Centre.

Over the course of hearings, officers and other witnesses testified about racism, sexism and bullying in the police force, and even officers having sexwith the very survival sex workers they were supposed to be protecting.

Both the VPD and the RCMP apologized to family members of missing and murdered women for failing to catch Pickton sooner, despite numerous early tips and warnings.

The memorial stones project had faced some early criticism in the community, with some questioning whether sidewalk pavement markers were a respectful way of honouring the murdered women. Kirkham countered the concerns, saying the stones are a reminder of the lives lost under tragic — and preventable — circumstances.

“We’ve heard through the critics that the stones only highlight victimhood, and that when pedestrians trample over the names of the dead, some argue they are being victimized again,” he said. “I say the Living Memorial Stones become reminders and voices calling out that these women had a name.

“And although they are just four inches square, and may in the future become obscured by the dirt and dust of urban life, they tell an emotional story to the casual walker who comes upon them: that he or she is standing where this woman once stood.” 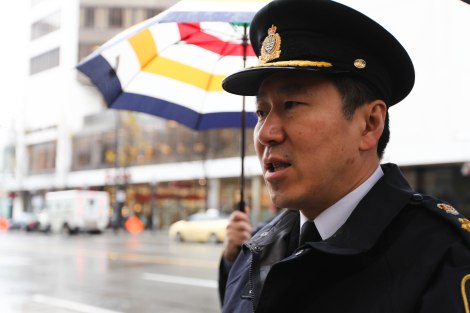