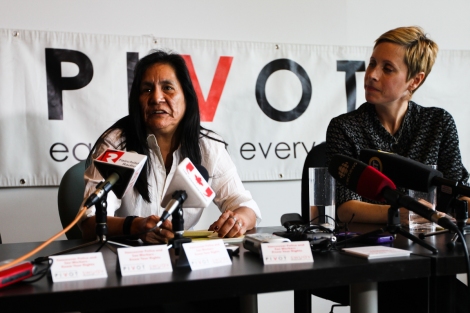 Sex workers in Vancouver’s Downtown Eastside will soon be getting special wallet-sized cards educating about their rights with police, thanks to two advocacy groups — Pivot Legal Society and Sex Workers United Against Violence (SWUAV).

The two groups’ previous collaborations include winning a high-profile Supreme Court of Canada case which saw the country’s prostitution laws declared unconstitutional, as well as convincing Vancouver police to overhaul their own enforcement of those laws.

“They should be protecting the women a lot better than what they do,” said DJ Joe, a sex worker with SWUAV, and board member of the city’s Sister Watch. “When you call in and tell them you need help, it takes them two or three hours to even get there. They need to respond a lot quicker.”

“A few times times, I’ve phoned in and it took them two to three hours to respond, which is too late to help these women. It’s hard to be a part of this community — to try to protect this community, and protect the girls — it’s a lot of work, in my experience.”

For Pivot, the cards are a pocket-sized next step to spread the word about the Vancouver Police Department (VPD)’s newly declared Sex Work Enforcement Guidelines. The new approach mandates that police prioritize sex workers’ safety – rather than punishing them for breaking prostitution laws. Similarly, where nuisance complaints are filed against a sex worker, police are ordered to seek alternative approaches to enforcement.

“Historically, there has been very little trust between sex workers and the police,” explained Katrina Pacey, with Pivot Legal Society. “Sex workers have often been hesitant to call police if they are in trouble, because of a fear that they would be arrested or experience discrimination by police.”

“This points to the harms caused by the criminalization of sex workers… They’re the victims of an offence, but calling police may draw attention to the fact that they, too, were engaged in criminal activity — they may face arrest or some form of stigma or discrimination by police when they make that call.”

While the cards cannot force police to follow their policies, or protect sex workers per se, they serve as a reminder of the new guidelines — hopefully holding officers to account, and educating their holders at the same time.

“It’s hard enough that we’re struggling down here,” Joe said. “When we show them this card, I’m hoping they’re going to appreciate it and use it.”

“I hope the message gets across — and maybe make them feel more comfortable that we have these cards out here, and they can be a lot safer… There’s a lot of risks to being out here on the street. We go through too much, already, out here working. With some of these women, it’s hard enough being a single mother, just trying to survive down here.”

One of the key aspects of the VPD’s new addresses nuisance reports filed against sex workers. Pacey said the policy represents a “significant” step forward.

Some might be surprised by the VPD’s seemingly radical language in its policy – which names colonization and racism as root causes in the sex industry and the oppression faced by survival sex workers.

“The VPD recognizes that the DTES has a high percentage of Aboriginal people and that Aboriginal women are over-represented among the survival sex workers,” the guidelines state. “This is an indicator of the broader, systemic issues resulting from colonization, racism and the Residential School system which continue to adversely impact the Aboriginal community as a whole.”

“It has been documented that indigenous women and children experience disproportionate rates of sexual exploitation both on reserves and in the urban community. The combined effects of poverty, race discrimination and cultural losses profoundly affect Aboriginal peoples and are significant contributing factors to inequities in status among Aboriginal women in the DTES. The VPD understands that these long term systemic problems require the police to take an educated and sensitive approach.”

While some have expressed skepticism at the sincerity of the police force’s guidelines, Pacey believes that for once, Pivot Legal Society and the force may, in fact, be moving in the same direction — at least on this issue.

But the bigger picture behind these new cards raises the question of Canada’s prostitution laws more generally, in which sex work itself is not an offence, but many associated aspects — such as hiring bodyguards, running establishments or ‘living off the avails’ of the trade — are illegal.

In the wake of the Supreme Court’s ground-breaking decision, uncertainty remains over the future of Canada’s laws. Those laws remain controversial, even within feminist circles. Some abolitionist advocates believe that prostitution itself is a form of violence against women — and in particular the over-representation of Indigenous and racialized women in the sex trade reflects a form of colonial oppression.

According to Pivot, the issue of protecting sex workers from violence is paramount – hence the cards, and working with the police on its new guidelines.

“The legacy of missing and murdered women in this community has been, in part, the result of Vancouver police neglecting and failing to respond when sex workers experience violence.”

On Pivot’s website, Pacey pondered the fact that just over 10 years ago, Pivot’s earliest project was another “know your rights” card for the police – albeit not targeted at sex workers.

“[We] stood on the corner of Main and Hastings, handing out ‘Rights Cards’ to folks as they walked by,” Pacey wrote. “I had just completed my first year of law school, and our small Pivot team had just completed our first project – a wallet-sized card that told people about their legal rights in relation to police.

“I will never forget that day. I felt like my legal education was already so useful, and I was part of something really impactful. I saw so clearly how Pivot could serve as a powerful reminder to the residents of the Downtown Eastside that they have rights; rights that are protected by Canada’s highest laws. And even if the police disregard those rights, the women and men that I spoke to on that day reminded me that knowledge is power and now they had both.”

Day-to-day life on the survival sex trade is always a risk, Joe says, as she stands at a DTES corner outside Pivot’s offices, wielding the new sex worker rights card. Have things improved or worsened in terms of women’s safety in this neighbourhood?

“It’s hard to say — it’s up and down, like a roller-coaster down here, in the Downtown Eastside,” she explains. “You don’t even know what’s in the next minute or the day after. It’s hard to say what’s going to happen.”