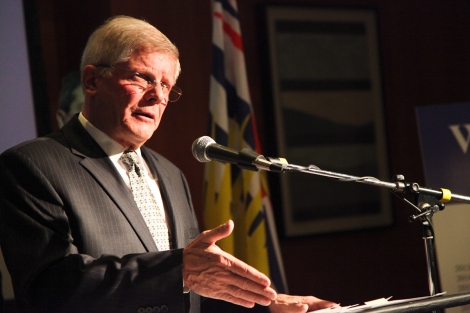 Cummins announced his proposal to end the tax introduced by former BC Liberal premier Gordon Campbell in 2008, as the provincial Tories launched a set of budget ideas this morning.

The party’s fiscal framework would see a Conservative government force MLAs to spend “much of their time” seeking ways to trim spending across the board, despite modest spending increases over five years in certain areas.

“British Columbia will be a lot better off with the elimination of the carbon tax, especially those British Columbians living in northern and rural areas of the province who are especially hard-hit by a carbon tax,” Cummins told reporters gathered at Vancouver’s Queen Elizabeth Theatre. “Let’s face it — we’re the only jurisdiction in North America that has that tax.

“It puts us at a competitive disadvantage in business. It makes the cost of living that much higher for folks.”

Cutting the tax would cost the government $300 million each year, totalling $1.2 billion in lost revenues over the Tories’ five-year budget proposal. But when asked how he would make up for the income, Cummins vowed not to renew several tax cuts introduced alongside the carbon tax.

The Tyee asked Cummins how his party would mitigate the impacts of climate change on the province in the absence of a tax. The former Member of Parliament suggested that improving transportation systems, along with some unspecified future plans, would flesh out a Conservative government approach to global warming.

“If you want to talk climate change, the carbon tax was introduced as a method, we were told, to eliminate B.C.’s carbon footprint,” Cummins told The Tyee when we asked how his party would mitigate the impacts of climate change. “It certainly hasn’t been effective.

“In fact, our carbon footprint has increased over time. We think those climate issues are very important for British Columbians. We have to do the best that we can to ensure we address their concerns. The carbon tax and the elimination of climate change in this province haven’t gone hand in hand — they’re two separate issues.”

The party’s fiscal projections address spending until a promised fall 2017 election. Projecting a $209 million surplus next year, that is expected to nearly double to $390 million after four years, if the party is elected to a majority.

But the platform is not, on the surface, very far removed from BC Liberals’ own forecasts — which predict a $197 million surplus this year, and $390 million after four years. With a Jan. 23 Angus Reid poll suggesting that only 10 per cent of voters would choose Conservatives in an election, the modest budget seems designed to woo dissatisfied Liberal voters to the upstart party.

Compared to the BC Liberals’ 31 per cent support, and New Democrats’ 46 per cent, the poll suggested Tories are tied with Greens.

But Cummins shakes off any comparison to the Liberals.

“I’ve never been accused of being a liberal for a long, long time!” Cummins told reporters, chuckling. “We’re conservatives… there are some folks over in Victoria who would like you to believe that they’re conservatives who call themselves Liberals. But liberals they are. We’re the true blue thing, and intend to operate in that way — to ensure the public’s money is well-spent.”

Cummins told reporters that his party will prioritize supporting industry, particularly in the natural resource sectors of mining, forestry and natural gas, in order to build “decent” jobs in the province.

“People are leaving this province in droves,” Cummins said. “We haven’t seen that since the dark days of the ’90s.

“We have to do better, to work with industry to create high-paying jobs in British Columbia and opportunities for British Columbians to raise their families and enjoy life here in B.C…. We see revenues over time in the natural resource sector increasing. Those are the types of activities that take place in rural B.C. If we’re to continue to generate the kinds of revenues that we need to support our province, then we have to support those industries, and make sure that they can operate in an efficient manner.”

While some have raised questions about the Conservative’s ability to cut expenditures without increasing taxes, maintaining the carbon tax, and with slight increases in education funding, Cummins told The Tyee that the party has “no appetite” for a battle with labour unions, as was seen after Campbell’s 2001 election.

“We respect the good work that British Columbian civil servants do — that includes teachers and the full spectrum of government employees,” Cummins told The Tyee. “We believe they deserve a decent wage, and deserve to be well-represented in those negotiations.

“We’re certainly prepared to work with them to ensure there’s harmony in the public service work force.”

The province’s carbon tax was launched in July 2008. It taxes carbon emissions at $10 per ton, a figure which rose each year by $5, reaching $30 a ton last year. It faced controversy in the business community, which argued it damaged B.C.’s economy.