Published in The Tyee | May 14, 2013 | Circulation: 1 million unique monthly readers 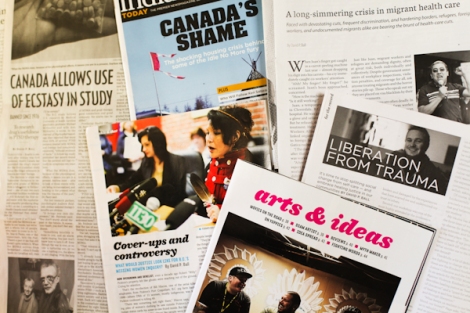 In the final hours of election day, the BC Liberals have taken an increasingly strident tone in emails to party faithful as polls near their 8 p.m. close, hinting at a deepening sense of urgency particularly in Christy Clark’s riding.

Despite heading into election day with an optimistic message to the party’s membership list late last night — entitled “Countdown to Victory” — campaign director Mike McDonald emailed members a series of vote-pulling messages over the course of the day.

“We have been the underdogs in this campaign, but we have never given up,” McDonald emailed to party members at 6:04 p.m. “I’m asking you to give it one final effort to help get people to the polls before 8pm PT. Dig deep. Phone and visit potential voters.

“It’s full-on battle stations. We can do this!”

The latest email concludes with an ominous postscript for Clark’s Vancouver-Point Grey riding, where she is battling the NDP’s David Eby: “P.s. The Premier is in a tight race. If you know someone in Vancouver-Pt. Grey, let them know they still have time to vote.”

In an email earlier in the afternoon, the party organizer observed that turnout was going in the Liberal’s favour, though no figures were presented to support the assertion.

“We can see that we have a potential turnout advantage at the polls,” McDonald wrote in the 2 p.m. email. “At the current rate of turnout, if we get our vote out in the next 6 hours, victory is ours.”

Three hours later, the campaign manager made another observation about voter turnout, suggesting that — unlike advanced voting’s 25 per cent boost from previous elections — fewer people than expected were showing up at polling stations.

“Overall voter turnout is still pretty low as of 5pm so we will gain the edge by continuing to turn out our vote,” McDonald wrote at 5:05 p.m. “Let’s pull out all the stops!

“Think about people you know around the province. We need to pull votes in the North, the Cariboo, the Thompson-Okanagan, the Kootenays, Metro Vancouver, the Fraser Valley, and Vancouver Island… Few expected this election would be this close.”

Neither McDonald nor the NDP campaign returned requests for comment by publication time.