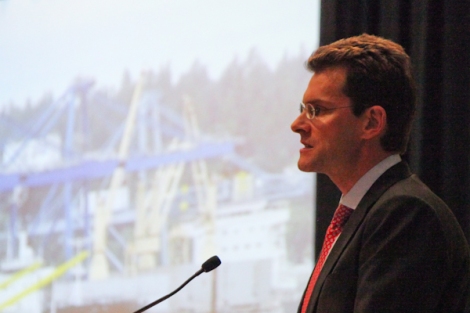 Faced with mounting environmental pressure over the proposal to build a four- to eight-million ton coal transfer terminal at Fraser Surrey Docks (FSD), and its recent approval of the expansion of North Vancouver’s Neptune terminals, the regional port authority opened its annual meeting to public questions for the first time today.

From several university scientists to women singing a duet in wide-brimmed, colourful hats, the questions flooded in one after the other, all 24 of them critical of the port’s impact.

“Port Authority, what are you thinking?!” the two women crooned to the packed audience of 300. “Are you responsible? If so, to whom? Do you answer to Harper only? What happens when global warming catches up and lowers the boom?”

Acknowledging his response was considerably less tuneful, the president and CEO of Port Metro Vancouver (PMV) insisted that although sustainability is a key consideration for its operations, the cargo exported through its facilities is not.

Those questions, Robin Silvester repeated throughout the meeting, fall outside PMV’s mandate — and should be instead directed to Ottawa, which appoints the port board and is responsible for export policies.

“The questions you raised are important, but I’m afraid you are raising them with the wrong organization,” he said. “They are questions for the federal government.”

Much is at stake in the public debate over port exports. With $172.4 billion in cargo flowing through its facilities annually, Silvester reminded attendees that his operations are a massive economic engine not only for the region, but nationally: the port’s operations contribute nearly 100,000 jobs across Canada — 57,000 of those in the Lower Mainland — and contribute $1.3 billion in taxes.

He also told attendees that PMV had heard residents’ concerns about coal exports.

“We know that growth has impacts,” Silvester said. “We’ve heard some residents in port communities express concern about port expansion, and the effects of port operations on the environment and their quality of life; this includes the impacts of vessels, trucks, railcars, terminal activity, and the types of cargo moving through the port.

“As Canada’s largest port, we have a responsibility to provide leadership on the sustainable development of port operations. Sustainability is a key component of our vision, strategic priorities, and core corporate values.”

But Silvester ruled out the demand, repeated by many speakers, for open public hearings on FSD’s proposal before any decision is made.

In an interview following the meeting, Silvester told The Tyee that though the public input was unprecedented since his 2009 appointment, he wasn’t surprised at the high turnout or tough questions.

“It’s a very complex issue that’s being hotly debated, and I think that’s a healthy thing,” he said. “But it’s not out of keeping with the community feedback that we’ve had, both positive and negative. We didn’t see many positive comments today, but we’ve had many, many emails and expressions of support.”

Asked about when the authority might decide the fate of FSD, he said there is no “arbitrary” deadline, but rather when the environmental and technical assessments are completed, and public input considered.

“I would expect there will be an answer to the process somewhere in the near future,” Silvester told The Tyee, “but we don’t have a timeline.”

The proposed coal terminal’s president, Jeff Scott, sat quietly through the speeches and did not speak publicly about his hopes to complete the terminal.

Last week, FSD hosted open houses to meet directly with residents interested or concerned about its proposal to build a facility to transfer four million metric tons of coal a year from U.S. trains onto barges bound for Texada Island, and on to Asia.

Last December, he told The Tyee in an interview that, “We hope to be operational by mid- to late-summer.” But with the port eschewing hard timelines, Scott was mum on whether his hopes for a decision in the next few months would come to fruition.

“We haven’t heard anything, and continue to work with the port,” he told The Tyee after the meeting. “We’re focused on building a facility that is clean and efficient, and can handle products effectively. That’s what we continue to focus on with our coal project.”

West Vancouver resident Lynne Quarmby told officials she was “tremendously impressed” with the port’s “scale and complexity” on display at the meeting.

But as a cell scientist — Quarmby is chair of Simon Fraser University’s molecular biology and biochemistry department — she added that she is increasingly concerned about climate change, and coal’s impact must be factored into environmental considerations.

She told PMV she sympathized with their limited mandate, which precludes all but the most direct impacts of their own facilities on the environment and community — not climate change caused by its cargo.

“I appreciate that you’re caught in a really lousy situation right now,” Quarmby said. “To continue with the way you’ve worked, very successfully all these years, all of a sudden everything is changing; the rules of the game haven’t really changed yet.

“The rules haven’t changed, so you’re still in the position of exporting (coal). We have been taking these issues to the federal government, and they’re not hearing us. The powers that be have been slow to change for many understandable reasons… What can we do to help you change the situation? I’ve heard you, on several occasions, say, ‘I’m sorry, it’s just not my job to worry about climate change.’ What can we do to help make that your job?”