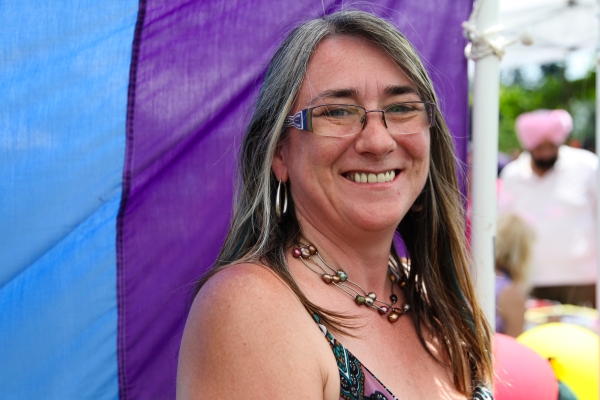 The Rainbow Concert Band kicked off Surrey’s 14th Pride festival with a short march through Holland Park on Sunday, July 7.

Organizers say the afternoon event’s welcoming, “family-friendly,” community-fair vibe is a better fit for their community than a massive street march like Vancouver’s.
“Big cities like Toronto and Vancouver do big marches; it doesn’t fit our city,” says Surrey Pride Society president Jen Marchbank.
“This is what our community wants: not a parade through the streets, but actually taking the time to be together in the park and allowing the people of Surrey who are not part of the LGBTQ community a comfortable space to learn a little bit more about us and to perhaps open their eyes.”
Several hundred people came and went throughout the afternoon, casually milling about between several dozen tents, many chatting in the shade of giant rainbow flags to seek shelter from the afternoon’s blazing sun and to listen to performers.
“It’s getting bigger and better every year,” Surrey-Whalley MLA Bruce Ralston told the crowd. “We are building a more tolerant city here in Surrey.
“While we have taken strides here in British Columbia, prejudice exists, discrimination exists, change is still important,” he said. “But we can also look to our friends, allies, and gay brothers and sisters throughout the world and realize there is much work to do.”
Organizers say one of their most important goals in planning the event was to reflect and celebrate the ethnic diversity of BC’s second-largest city.
“The City of Surrey is a very diverse community, and we are part of that diversity,” Marchbank says.
It’s crucial not to force people to choose between their ethnic backgrounds and their gender or sexual identity, says Mo Kazerooni, chair of Our City in Colours, an organization that raises awareness about gay issues in diverse cultural communities.
“Sometimes Surrey gets a bad rap,” Kazerooni says. “But it’s important to not pass judgment. Surrey is a very diverse community, and the different ethnic communities create that diversity here.
“There is a lack of dialogue in certain communities when it comes to sexual and gender minorities,” he says. “One of the arguments we hear is that being gay is a Westernized concept. The thing is, it’s not true . . . The lack of role models who are out creates a kind of negative perception of LGBTQ people.”
The festivities come in the wake of the Surrey school board passing its first anti-homophobia policy last month, after more than a decade of legal challenges, gay book bans and what many activists saw as intransigence.
For one youth volunteer with the Surrey Youth Alliance, the city’s school district has been one of the greatest stumbling blocks to combating gender and sexual oppression in the region. Vanessa Burt tells Xtra that too many teachers and staff still “turn a blind eye” to homophobia in the classroom.
“A lot of youth are very scared to come out,” she says. “Not a lot of schools are welcoming of that — they’re always telling kids to tone it down, don’t hold your girlfriend or boyfriend’s hand, or not to dress a certain gender, even though they want to be that gender.
“Since we’re such a diverse culture, we need to be able to express who we are, not just keep it bottled inside.”
Despite the school district’s new policy, Burt and others at her organization’s booth are concerned the new regulation will not be truly implemented, given the district’s long and controversial history.
“On paper it looks good, but in schools it doesn’t,” she says. “Homophobia is huge here in Surrey.
“We’re the new age of youth. A lot of us are coming out, and we’re out and proud. But not a lot of schools like that . . . Kids are taught certain ideas. You need to teach them it’s not okay.”
“It doesn’t matter what you look like; if you’re a good person, and you’re living your life in a positive way, that should be celebrated,” says Syn, from Surrey’s Skin ’n’ Bones group, which aims to promote healthy body image and respect for different looks and sizes.
“People have such a negative connotation about Surrey, but look at this,” Syn says. “You’ve got people of all sizes, all colours, allies, gays, straight — and we’re all having a great time supporting each other and supporting love. That’s what it should be about.” 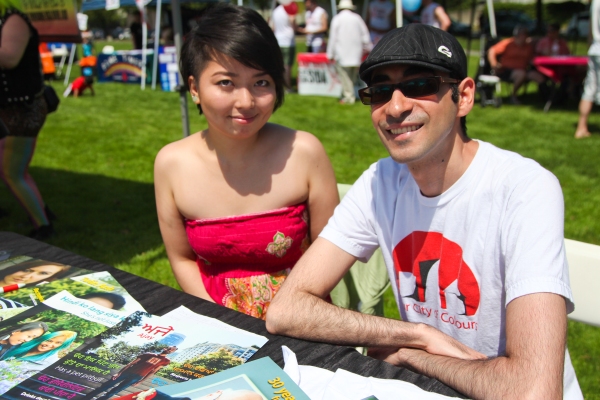