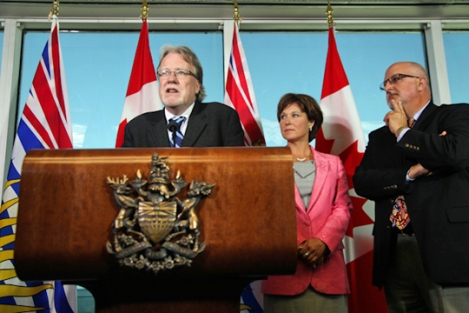 Labour leaders admitted today that a recent liquified natural gas meeting with Premier Christy Clark was “surreal,” and praised the government they opposed only months ago in the provincial election.

Today marked the launch of a new committee to ensure B.C. workers are trained and ready for a much-touted BC Liberal campaign promise to bring 100,000 jobs in future LNG projects.

Jim Sinclair, president of the BC Federation of Labour, and Tom Sigurdson, executive director of the B.C. and Yukon Territory Building and Construction Trades Council, agreed it’s time to set political differences aside.

“In the labour movement, we’ve spent our whole lives… fighting for decent jobs, for training, for safety,” Sinclair told reporters in Clark’s conference room. “And if we don’t do that, we’re not going to be successful as a labour movement.”

Clark said she invited the union organizers to the first meeting of a committee which will also include industry representatives, and no doubt is hoped to send a reassuring signal to international energy investors that labour is on board.

Asked about labour’s support for her NDP nemeses before her party’s landslide victory in May, Clark replied, “I’m not a sore winner. I recognize that even if we didn’t all work together toward electing me and my government, the campaign is over. Let’s end the politics, and start talking about how we put British Columbians to work.

Labour and government agree that a widespread skilled training shortage and aging workforce could jeopardize the province’s efforts to attract overseas investment in its many anticipated LNG projects.

“We have nobody trained to do the jobs,” Sinclair told The Tyee outside the premier’s office. “This doesn’t take a rocket scientist or a 40-year study.”

Sigurdson, a former New Democrat MLA in Alberta, said young workers must be the target of new skills training programs for projects four or five years down the road.

“We need to get young people engaged today,” he told reporters, “so that when the large projects come along, they are able to pick up the tools, be productive, work safely, and make certain they have the opportunity to work and support their families.”

Both active supporters of Clark’s NDP opposition, Sinclair and Sigurdson frowned somewhat uncomfortably alongside the premier in a press conference this afternoon, but burst into laughter when asked if they’d set all differences aside.

“It’s not even possible,” Sinclair said. “Let’s get real! We’ll have our disagreements. I’m sure we will in five minutes. But the bottom line is, this thing requires us to be on the same page.”

But with some environmental groups criticizing the government’s push to dramatically boost the natural gas sector, and some First Nations’ concern over the controversial impacts of hydraulic fracturing and LNG pipelines across their territories, Sinclair denied there is a contradiction between labour’s praise for the sector while some unions oppose pipelines from Alberta’s oil sands.

“At this point, unions have different positions on these pipelines,” he said. “What we’ve said about the natural gas one (is) if it is to be built, then British Columbians should build it. We can’t look away and pretend it’s not going to happen, and then when it happens we run around saying, ‘We have nobody trained to do the jobs.'”

The LNG committee aims to produce a strategy for skills training by the end of September.