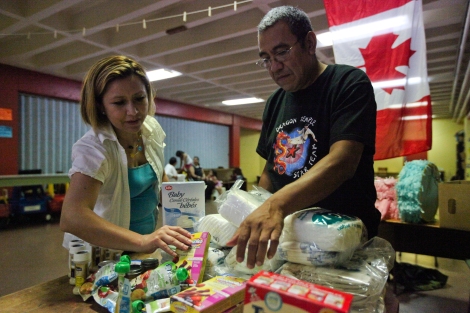 Months after her visa expired, Alma panicked when police knocked.*

The soon-to-be mother feared an inquisitive nurse had alerted immigration officials after an ultrasound appointment. Although the cops’ visit was coincidental, Alma’s suspicions are widely shared by others without Canadian papers, creating a potentially deadly situation for those without status – either as temporary or permanent residents, or refugees.

“It is a culture of fear,” said Marijke de Zwager, a Vancouver midwife. “Mostly they’re afraid of getting caught (or) reported. They’re anxious about papers, and being found out in public… It makes people feel safer if they’re just under the radar.”

Amidst hardening rhetoric against “illegal immigrants,” the June 24 deportation arrest of a Pakistani woman in a Montreal emergency room compounded the fears, as well as a March 13 immigration raid on a Vancouver construction site, filmed for reality TV.

In response, a network of health workers, many refugees themselves, have begun quietly filling gaps faced by non-status women in B.C. Last year, eight Latin American women recruited de Zwager to train them as doulas – pregnancy and birth coaches.

“We help with many different things,” said mothers’ support group leader Araceli Orozco, who fled Mexico pregnant in 2007 after her husband was kidnapped, only to have her baby here without coverage. “The women are looking for health care, education, a doctor, and other support. There’s much more attention now to pregnant mothers – they don’t have families here. Before, I was in a similar situation as these women. I didn’t have money, I didn’t speak English, I didn’t have friends or family.”

When Maria gave birth last year, neither she nor her construction-working husband had status.*

“Many women don’t,” she said. “I recommend that those women look for help like the midwife I had – to find someone who will help them and orient them and so that they shouldn’t be scared and to fight to get help. I found help and have a really happy, healthy baby.”

“All of us went through this kind of situation since we came,” he said. “People are afraid of institutions as they are right now. There’s a fear of accessing services.”

“Any patient who arrives at hospital in B.C. and requires medical care will never be turned away,” said Ministry of Health spokeswoman Trish Rorison. “There are no requirements for hospitals to report anything to immigration authorities about services to patients, or even to enquire about how or why the person is in the country.”

A Vancouver Coastal Health spokesman concurred. But without explicit policies, fear and uncertainty remain. This year, Toronto joined 36 U.S. cities with “sanctuary” policies barring citizenship queries by service providers. With around 4,000 undocumented migrants in the Lower Mainland, Cruz wants B.C. to do likewise.

Until then, his network continues to support undocumented pregnancies during what for many is a “monumental turning point,” de Zwager said, recalling one mother who caught her own baby, despite nervousness about not being in a hospital.

“Even though it wasn’t what she had originally planned, she felt empowered by her own experience,” de Zwager said. “It gave her something towards her future and towards her determination to stand by what’s best for her family.”

* Names changed for sources identified by first name to protect their anonymity.