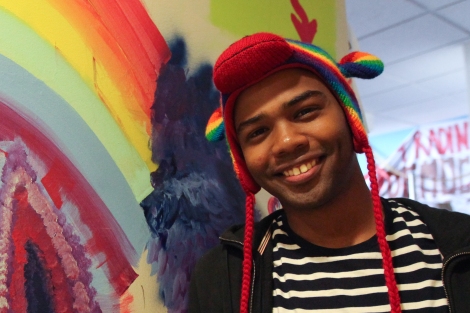 ride UBC co-chair Ivan Leonce says he feels “on the periphery” of UBC’s events and advertising, which are generally directed at straight people. Photo by David P. Ball

As the University of British Columbia continues to reel from revelations of pro-rape and anti-aboriginal chants during its frosh orientation-week celebrations, many are warning that the problem is more systemic and includes homophobia and transphobia.

The director of UBC’s Institute for Gender, Race, Sexuality and Social Justice says the frosh chants are merely one part of the “ritualization of inequality” on campus revealing a “failure of public education,” which will take significantly more effort to address than two new staff positions or a $250,000 payment by commerce students as pledged by the university.

“We need to make sure that public education is keeping a finger on the pulse of where things are going drastically wrong,” Mary Bryson says. “It’s very convenient to focus on people who led the first-year students in those chants.

“I’m more concerned with the response of the administration, faculty members and staff,” she says. “The chants are serving, in part, their cultural function, which is keeping business as usual — the same formation you find in board of directors’ meetings in a corporation, for which Sauder [School of Business at UBC] is preparing future leaders.”

This fall’s scandal led to Sauder cancelling future frosh activities and the resignation of the leadership of the Commerce Undergraduate Students (CUS). Apologizing for the incident, UBC ruled that the CUS must pay $250,000 toward sexual assault prevention services.

In an emailed response, UBC’s vice-president of students — who spearheaded the university’s investigation into the frosh incidents — says she received no specific reports of homophobic or transphobic incidents as part of her inquiries.

“All of these behaviours are connected,” Louise Cowin acknowledges. “These incidents are indicators of larger systemic issues present in our North American culture. We see sexism, racism, homophobia in popular music, television, movies and print media every day.”

The rape chant — and reports that some commerce students chanted “White man, steal our land” as part of a “Pocahontas” team — is particularly distressing to Pride UBC’s online media coordinator, who says it’s gone unchallenged for many years.

Public incidents targeting women and aboriginal people may silence gay students who feel they have no avenue for complaint, Sarah King says. “It was going on for 20 years. People don’t know where to go.”

In the eight years since UBC publicly raised its rainbow Pride flag for the first time, homophobia continues to be a reality for some students.

Sociology instructor Rachael Sullivan completed her PhD last year on 26 LGBT students’ UBC experiences. The rape chant, she says, reveals a tension between administrators’ “desire to claim” the campus a safe place and “what actually happens.”

The assumption that being straight is normal and acceptable remains “pervasive” on and off campus, she adds.

Sullivan says her interviewees would initially say UBC is “for the most part” safe. “But then they’d go on to tell me how it wasn’t — ‘It was safe, except this one time when . . .’ — fill in the blanks, they’d describe an incident.

“It’s connected to the kind of sexism found in the chant — the ways in which gender-normative ideas about what women and men are supposed to be on campus constricts what queer and trans students can be on campus. If they don’t fit the mould, then they don’t fit in.”

“My own personal experience is that it isn’t exactly homophobia I feel directly on campus; it’s more a climate of heterosexism,” says Ivan Leonce, co-chair of Pride UBC. “I feel on the periphery of events and advertising — they’re directed towards straight, cisgender people.”

“And not just a single workshop that folks can attend, but a prolonged educational experience and outreach, advertising and posters.”

Cowin says the university will strive to create an environment that’s welcoming to everyone. “Our focus moving forward will be to ensure that all orientation events and activities would provide an inclusive, safe and welcoming experience for all students. If other reports are made, they will be investigated.”