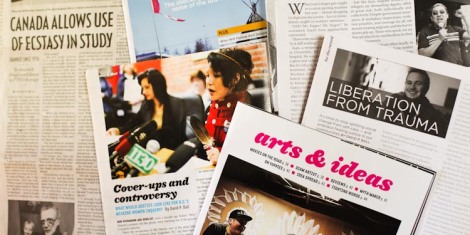 “We’re being attacked,” Bonnie Devine thought as a brick shattered her living room window, only inches above the couch where she slept.

It was just past 5 AM on September 29th, and luckily the brick-throwing vandals didn’t break through the second of two window panes, which would have sent deadly glass shards cascading upon her.

The mother of four calmly checked on her four boys before inspecting the damage. A brick lay broken in half on the lawn outside. Three of her car tires were slashed (the next day, the fourth blew out while driving with her boys).

The attack follows six years of white supremacist violence against her family, which they link to 26-year old ringleader Kyle McKee.

“This time it’s a brick,” she ponders. “But who knows what it’ll be next time.”

Amidst a rising tide of hate activity in Canada, the couple have been targeted again and again for their activism with Anti-Racist Action Calgary.

Over six years, they’ve faced death threats, fire-bombing, home invasions, and horrendous beatings – the worst of which saw a group of thugs break into their home in 2010, jumping on Bonnie’s husband Jason—along with a friend of his—and battering them so severely with hammers and bats there was blood smeared on the walls.

“They tried to kill me by beating my head in and beating my body,” he recalls.

The local white supremacist group Blood & Honour—part of a global network originating in England—was linked to the attacks. On the same day as the 2012 White Pride March, also known as the most awful parade ever, McKee was arrested after a racial slur-laden assault outside a liquor store, and convicted of breaking a bottle over the victim’s head, stabbing him with the glass, and biting him.

This fall, the violence returned—only a few months after McKee’s release from prison.

“We were fully expecting an attack to happen sooner or later,” Jason admits. “Since he was incarcerated, the movement has gone downhill. Now he’s back.

“The thing is, on some level you can develop a siege mentality. We are under siege to some extent.”

As long as McKee and Blood & Honour are out organizing, he says, his family will keep experiencing violence; “and not just us, but people of colour, LGBTQ, anybody who is different, disagrees with them, doesn’t look like them, or just people they don’t like.”

Jason and Bonnie have become a lightning rod for racist groups because they have spoken out against racist hate crimes and neo-Nazi recruitment. At first, authorities cautioned them to simply dismiss the racists as “clowns,” Bonnie recalls: “Just ignore them and they’ll go away.”

At a 2011 White Pride World Day protest, Calgary police even formed a protective cordon around the McKee-founded Aryan Guard while arresting members of Anti-Racist Action instead. Evidently, the police are trying to keep the Anti-Racists away from the Neo-Nazis to minimize conflict. Members in Vancouver are facing attempted murder charges after lighting a Filipino man on fire, then clobbering a black man who tried to help. In the past local Muslim, LGBTQ and Jewshave also been targets of various hate crimes.

Canada’s hate crimes, at least those reported to police, are rising. In June, a Conservative Alberta MP succeeded in removing hate speech from the Human Rights Act. But since topping the country’s list of most-reported hate crimes per capita in 2006, Calgary has since cut such reportsbelow most southern Ontario cities and even elected the country’s first Muslim mayor.

The last time Jason saw McKee was just after the 2010 beating, before his brief jail-stint. Devine was putting up anti-racist posters when McKee and an associate rolled up in a car wearing ski masks.

“Kyle had his baseball bat out the side of the window, and he threatened me,” Devine recalls, “asking if I needed another visit at my house.

“Since he’s been released, the last thing I saw was he had some posts on Facebook a while ago … He said the only reason I made it through last winter was because he was in jail … ‘Maybe I should kick Mr. Devine’s head off.’”

The Devines believe McKee is connected to the recent attack, but Bonnie thinks the latest incident likely came from new recruits being initiated by attacking Blood & Honour’s enemies.

“The level of violence that’s been inflicted upon our family has reached a level of near-death,” Bonnie says. “So, to have something as minor as a window breaking and some tires slashed is leading me to believe that these are the less mature Nazi members, or new members that are just gaining their courage.

“Of course, the next level to me would be pipe bombs or fire. We’ve had molotov cocktails, but I’m more thinking of pipe bombs with nails in them.”

Jason is confident such racist groups aren’t simply “boneheads” spreading “ignorant ideas,” as some argue. They stockpile guns, knives and bombs, he says, and carry out vicious attacks.

“They actually worship and engage in violence,” he warns. “They’re out to carry out their ideology of white supremacy.”

Jason says Calgary police are taking a somewhat more proactive approach today, but insist they can’t do much without hard evidence. In Canada, it’s also not illegal to be a non-violent hate group member according to my source at the RCMP. In the past, however, cops were less than helpful.

In the aftermath of the 2010 home invasion, the couple nearly lost their four children after they sent them to stay temporarily with Jason’s mother. “We didn’t want them to see all the blood spattered all over the walls and stuff,” he recalls.

One day, a police officer and child protection worker knocked: “We appreciate and understand what you’re trying to do here,” Jason remembers them saying, “But essentially you’re like drug dealers and gang members, and your activities are putting your kids in danger … As of right now, your kids can’t return home.”

Amidst ongoing attacks on people of colour, queer people, Muslims and other minorities, all Jason and Bonnie have done is put up posters, distribute leaflets, and organize anti-racist protests.

“We haven’t broken the law in anything, whatsoever,” Jason says.

“The violence that’s in my community and inflicted upon my family is something that is the responsibility of everyone,” Bonnie adds. “It happens every day.