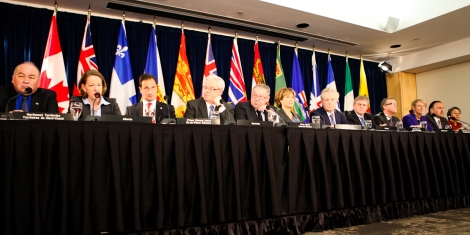 Canada’s premiers at a 2012 health meeting in Victoria. Photo by David P. Ball

Alberta’s energy minister insists the push for new pipelines from the oilsands will be unaffected by premier Alison Redford’s resignation Wednesday.

Asked if government could now change its backing for controversial proposals from Enbridge, Kinder Morgan and TransCanada, Diana McQueen told 24 hours nothing will change in Alberta’s efforts to get bitumen to market, despite concerns from First Nations, environmental groups and some municipalities.

“This won’t affect that at all,” she said. “We’ll continue to work hard as a government to support these projects. We will continue to be strong advocates.”

Over the past year, tensions came to the fore between Redford and Christy Clark, with the BC Premier issuing “five conditions” for Enbridge to build its Northern Gateway pipeline.

A recent thaw saw the two leaders ink a framework deal in November.

Chris Cox, an oilsands analyst with investment firm Raymond James, said while high-level resignations can create jitters, a far more pressing concern is actually getting any pipeline “to cross the regulatory finish line and get some steel into the ground.”

“I don’t think her departure puts that at risk,” he said.

As for Redford’s successor? “Even the most hardline individual in Alberta would be pragmatic enough to acknowledge that oil revenues are – surprise, surprise – pretty important here,” Cox said. “To risk that over differing political views with the B.C. government? I don’t think anybody would go to that extreme.”

Reacting to the resignation, Clark made no mention of pipelines, but lauded Redford for efforts “to secure our shared economic and environmental future.”