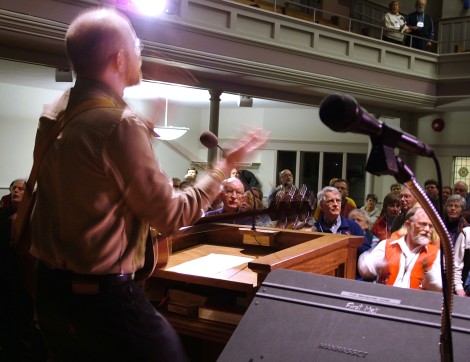 “Would you guys mind being a bit quieter back there?” comes a voice from the front of the bus. “The driver can’t concentrate.”

It takes a few moments for the voices to soften and the shakers to stop. “He’s our trail boss,” laughs Bruce Harding, as he stands with his guitar angled awkwardly over the bus seat. “He keeps this crazy little bunch of hymn-writers in line.” Harding, a songwriter and musician in the United Church, is on Vancouver Island for a weekend with other writers of sacred music. Soon the bus is on the road, and the music begins again, now with the addition of another guitarist, Paul Rumbolt, five new harmonizing voices, two egg shakers, clapping, and drumsticks. The volume builds excitedly.

With our cymbals and rattles…

A voice from the front of the bus adds to Rumbolt’s lyrics, “And shakers and drumsticks”). On the road between concerts in Victoria and Nanaimo, B.C., two hours apart, the “trail boss” is defeated at last, and the noise continues to build. It seems more and more like being a rock band roadie than on a bus crammed with some of the finest hymn-writers in the English-speaking world. Subversive power Collectively, this bunch of schoolbus rowdies have written 61 of the hymns we sing today in Voices United, and have published dozens of books of religious song and poetry. “These are truly the giants of hymn-writing,” points out Harding, editor of a much-anticipated United Church hymn supplement. It is the weekend of January 15-16, and prolific writer Ron Klusmeier has invited a handful of his international colleagues to Vancouver Island for three days of intense hymnity–two roundtable workshops, two massive choral concerts, one of which will feature a massed choir of more than 300 singers. Three waves of the church’s hymn-writers are represented: at the newest end, Linnea Good, Bruce Harding and Paul Rumbolt; in the middle, Walter Farquharson, John Oldham and Herb O’Driskoll; and the elders, Fred Kaan and Brian Wren, who inspired much of the later writers’ work and still write today. It’s any hymn-lover’s dream. “Singing in church is now a countercultural thing,” Harding says. “We don’t sing anymore in our communities. “We’ve entered a very strange age. It’s new territory. I’m trying to write pieces you could really dance to, pushing the boundaries of traditional hymnity.” The youngest of the hymn-writers at the gathering, 38-year old Harding has a musical fire in him, inspired by folk-rock style music and urban grooves. On Friday, at First Metropolitan United Church in Victoria, Harding performs his set with electric fervour. Taking the stage, he is short on speech and becomes with his acoustic guitar a blur of motion and energy. Harding’s words convey a sharp political edge, with an almost evangelical passion. The crowd, mostly older church folk, is on its feet, clapping and singing as Harding punches out a set of songs unlike anything you’d find in most standard United Churches. “I write in reaction to what everyone else is doing,” Harding admits. “At one large church I attended, I hated the music, but there was something we could learn from its evangelical style. I could care less if I work with a choir. The people are the choir.” These days, Harding is charged with compiling a supplement to the United Church’s current hymnbook, Voices United, which has been used since 1996. To reflect the changing role of music in the church, Harding is creating a new book to be released at General Council in 2007, after a test-run in congregations across the country. Most of the hymn-writers with us on the bus have submitted their poetry and music to Harding, in hopes of making the cut. The supplement will update the current hymn book with contemporary music, more possibilities for style and rhythm, and pave the way for a fully revised new music source within the decade. John Oldham, sitting a few bus seats in front, jokes about all the countless lyrics he’s sent Harding since the supplement project began–most of them rough, unfinished poems scratched on napkins and in Oldham’s trusted black journal. “Lots of great contributions to the ‘supplement rejection committee’,” Oldham laughs, referring to Harding by a new nickname. Of course, there is an obvious irony that Harding is in a position to reject work from the older, more experienced hymn-writers on the bus, like Oldham, Fred Kaan, Walter Farquharson, and Herb O’Driskoll. “Their poetry is etched deep within my soul,” Harding reveals. Deeper than words

… Deep in our hearts there is a common story

Deep in our hearts there is a common song

It was John Oldham who charmed me into spending a weekend road-trip with these seasoned hymn-writers.Oldham, a former United Church minister in Muskoka, Ontario, is an energetic and very unconventional man with a playful, heartwarming voice. He has journeyed to Vancouver Island to talk shop with other writers in his trade. We’re busing back to Victoria for the largest “massed-choir” concert of the the weekend. Oldham’s well-known hymns include Deep In Our Hearts and Sweetgrass and Candle, both co-written with composer Ron Klusmeier. Like many of the writers here this weekend, Oldham is featured not only in Voices United, but in Song Circling All the Earth, a newly published anthology of Klusmeier’s hymns. Standing to speak at the roundtable event of Friday evening, Oldham mischievously rips up his speech notes and lets them scatter to the ground. Tonight, he speaks from the heart. His subject: music of the heart. For Oldham and the other writers, it is on the emotional level that spiritual music affects us most deeply. “It’s heart stuff that we’re about,” Oldham says. “Heart and soul. If (a hymn) doesn’t touch their heart, you might as well go back to the muse.” [Former United Church moderator Walter Farquharson adds that the hymns he has written for the United Church canon–including Walls That Divide: Though Ancient Walls (VU 691, Teach Us Me God to Wonder (VU 299), andStay With Us Through the Night (VU 182)–each have a story and set of memories. South African archbishop Desmond Tutu personally thanked Farquharson for writing Walls That Divide: Though Ancient Walls, for instance, with its message that racism is anti-gospel. Music can give support and spirit to political struggles. “There’s a hunger within our church for new words and music to express a faith that is old and new,” he says. “The most moving thing is when someone tells me, ‘You gave me words for what was in my heart.” While Farquharson was Moderator, his song Stay With Me was mailed out to every congregation in Canada, as part of a pastoral letter explaining the church’s opposition to the first Gulf War in 1991. Stay With Me, also co-written with Klusmeier, is a song of comfort in despair, and hope in times of darkness:

… Stay with me through the night

Stay with me through the pain

Stay with me, blessed stranger,

‘Til the morning breaks again…

Farquharson explains that when Klusmeier first mailed him the finished music to his words in 1974, the song arrived just as his mother-in-law was on her death-bed. “For the ten days until she died, that music sustained us,” he recalls. Others have told him similar stories about the hymn’s power. One woman approached him after a workshop and explained that she and her husband were in an airplane crash, locked inside the freezing plane with little hope of surviving. “I just wanted to tell you,” she told Farquharson, “repeating those words over and over again helped sustain us.” Brian Wren, a British-American writer—and composer of A Prophet-Woman Broke a Jar (VU 590) and Bring Many Names (VU 268)—explains. “Music touches people at a very deep emotional level, at a level that cannot easily be verbalized,” he says. “It’s deeper than words. It’s our heart-music that speaks to us.” Wren, who teaches worship [at Columbia Theological Seminary in Georgia, USA, likens a good song to standing in one place long enough for it to become “etched into your imagination.” Wren was part of a “hymn-writing revolution” in England in the 1960s, when he and Fred Kaan began to rework and update traditional English hymns for theology and language that was inclusive of all people, not just white men. Kaan sits near the front of the bus, seeking refuge from the deluge of noisy instruments at the back. At 75, the seasoned British-Dutch writer—with 19 hymns in Voices United, such as For the Healing of the Nations (VU 401) and To Show by Touch and Word (VU 427)—is the oldest of the group, but the others still consider him cutting edge to this day. “Hymn writing is progressing,” Kaan reflects. “Hymn writers are taking on concern for political issues. I’m not talking about green pastures—it’s in the here and now. “I still am a committed pacifist more than ever. I feel ever more strongly that we need an all-embracing element to our song. I am hopeful that we can share love and peace with all people of all faiths and those who don’t necessarily express their lives in religious terms. “This is passionately what I am asking the churches to undertake.” Across the aisle is Linnea Good, whose home is at the United Church’s Naramata Centre, B.C. Good, like Harding, began writing in reaction to the more conservative language of traditional hymns. Shocked that songs of faith referred to God and the universe as exclusively male, Good began “tweaking” words to popular hymns to make them inclusive of women. From there, she began rewriting entire verses, hoping no one would notice. One day, as she tells it, she caught herself tweaking a Ron Klusmeier song. From that point on, she decided to take responsibility and write her own hymns. As a feminist performer (she doesn’t like the title “hymn-writer” because it tends not to draw an audience), Good uses music to introduce new images of the sacred into the United Church. Her well-known hymns include O God We Call (VU 411) and A Light is Gleaming (VU 82). “I wanted to sing about the things women do on a day to day basis,” Good says, “to sing as if the universe is not a boy. But any time we change the imagery we use in church, it needs to be an invitation. A new image needs to be a gentle way in.” As the mass-choir concert wraps up at the end of the weekend, it’s obvious the audience (and 300-person choir, which overflows from the stage onto the entire balcony and sidelines) is impressed. “It gives me hope,” says theology student Bernadette Levesque, who attended the weekend. “It means the artists and the theologians are in tune. They’re listening to the people.”