As former U.S. Vice President Dick Cheney spoke in Vancouver on Monday night — his first visit to Canada since leaving power — several hundred people demanded his arrest on charges of war crimes and torture, blocking both entrances to the upscale Vancouver Club by linking arms, as others staged a sit-in lasting several hours.

Police escorted speech-goers to the private book club event inside, at one point shoving an identified reporter forcefully, pushing an older man to the ground and stepping on sitting demonstrators. Similar scenes greeted Cheney the following day in Calgary.

“People around the world are going to see images of the Vancouver Police Department roughing up peaceful demonstrators when they should have seen images of [police] hauling Dick Cheney off to a prison cell. It’s lucky nobody was seriously hurt,” said stopwar.ca’s Derrick O’Keefe, one of the protest organizers. 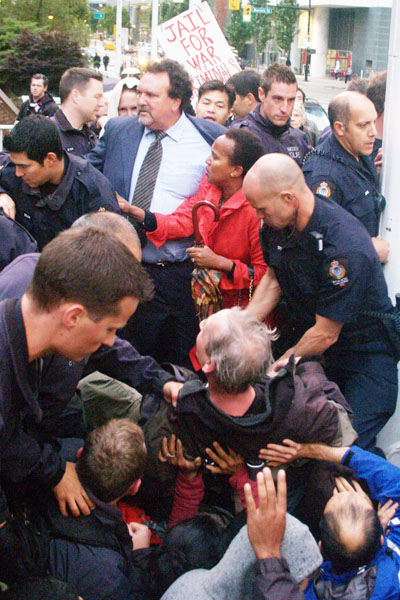 The crowd of about 300 — spurred by support from the world’s second-largest rights group, U.S.-based Human Rights Watch — demanded Cheney’s arrest for war crimes and torture. Cheney is in Canada promoting his new book, In My Time: A Personal and Political Memoir, in which he defends authorizing simulated drowning known as “water-boarding,” other “enhanced interrogation techniques,” and policies rendering U.S. terror suspects to torture overseas, as in the case of now-exonerated Canadian citizen Maher Arar.

“I never liked Dick to start out with,” said a man in a black suit and tie trying to enter the speech, who would not give his name. “But now I’m starting to like him more because of these dickheads,” referring to demonstrators.

Demonstrators shouted “Shame!” at Vancouver Club guests, tussling with Vancouver police in hopes of maintaining their blockade. However, most speech-goers were able to break through with police aid.

The demonstrations came after Human Rights Watch issued a statement calling for Cheney’s indictment for war crimes committed under the administration of former President George W. Bush. Under the Convention Against Torture, which Canada joined in 1987, signatory nations are obligated to both uphold and enforce international law, including making arrests and extraditing alleged war criminals to the International Criminal Court in The Hague, Netherlands.

“The U.S. has utterly failed to meet its legal obligation to investigate torture by the Bush administration,” said Human Rights Watch’s executive director Kenneth Roth on Saturday. “But that shouldn’t let other countries off the hook.

“Cheney’s visit to Vancouver is a rare opportunity to remedy this shameful failure to uphold the rule of law.”

Several bystanders visiting from the U.S. expressed support for the Canadian protest.

“I’d like to see [Cheney’s arrest],” said U.S. citizen Jim Nugent, on vacation from Ohio with his wife. “Eight years of George [Bush] and [Dick] Cheney were eight years of political hell. It’s so brazen of him to come here promoting his book.”

“I don’t know if we can bring him to trial, but we haven’t even tried. I’m getting discouraged with our president now because he’s not using the leadership he has. He’s not drawing a line in the sand.”

One demonstrator, Stella August, denounced the Vancouver police for protecting Cheney, who she said was not welcome in Vancouver, whether or not the Canadian state protects him.

“He’s a torturer,” said the Nuu-chah-nulth Indigenous organizer, her scooter parked in front of a line of police at the Vancouver Club’s north entrance. “He doesn’t deserve to be on Coast Salish territory.”

“Shame on the police for protecting that criminal. They’re a disgrace to the uniform if they can’t protect the law.”

Although most demonstrators did not expect police to arrest Cheney, many used the visit to call the Canadian government hypocritical — for instance, banning a visit by British Member of Parliament George Galloway last year for his pro-Palestinian views.

However, with the world’s two largest human rights groups — Amnesty International and Human Rights Watch — calling for the Bush administration to be brought to justice for war crimes and rights violations, and lawyers preparing lengthy case files in the event of an arrest, human rights lawyers claim that an arrest of Cheney or Bush is both legitimate and inevitable. In fact, earlier this year George W. Bush cancelled a planned visit to Switzerland, after Amnesty announced its lawyers had prepared a 2,500 page legal dossier on violations of international law to which the former U.S. president had admitted.

“We have to be here to be as witnesses, so he doesn’t feel he can just go anywhere without facing protest,” said Helen Turbett, a member of Stopwar.ca who participated in the sit-in blocking the Vancouver Club’s north entrance. “Dick Cheney said his torture was justified. I’m here to protest the fact that the Canadian government allowed him to come here.

“I just decided to sit down. It makes me feel I’m more solid.”