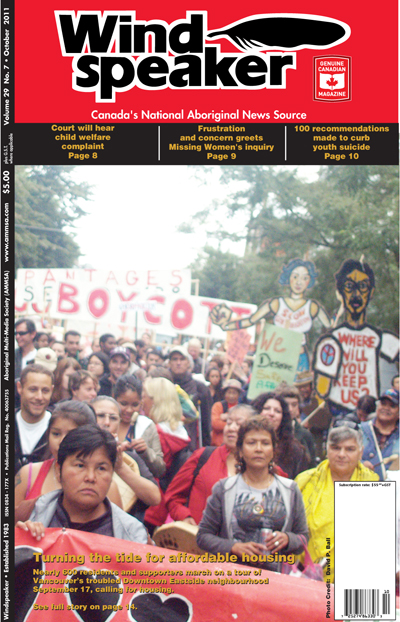 A scattering of cigarettes, strewn as offerings over the sidewalk concrete in front of the Regent Hotel. Candles of all shapes, placed tenderly as memorials amidst photographs of a 50-year old Native woman – Verna Simard. Flowers to remember the late Vancouver resident who fell to her death on this spot only hours before.

The sidewalk shrine was erected by a close friend of Simard’s within hours of her untimely death, which came almost exactly a year after the similarly suspicious falling death of Ashley Machiskinic from the same hotel. Her friend, who stayed up the entire night following the death, said she was exhausted and had few words to share with Windspeaker: only a tearful hug.

“Verna Simard, was my cousin and she was a person who mattered,” said Christine Simard-Chicago. “The media dehumanized her. She was a mother, grandmother, sister, cousin, aunt and daughter.”

The Regent Hotel is located just west of Downtown Eastside (DTES) Vancouver’s Hastings and Main intersection. The 98-year old brick building is typical of low-income hotels in this neighbourhood – the poorest off-reserve postal code in Canada. With a bar on the main floor, the Regent hosts hundreds of long-term residents living in single-resident occupancy suites (SROs), some on the verge of homelessness, many battling addiction, poverty and violence.

Locals say Simard’s death – like Machiskinic’s and the thousands of missing and murdered Indigenous women from this very neighbourhood – underscores a housing crisis of devastating proportions in Canada’s third-largest city, a city which touts itself as the “best place on earth.”

“We lost a sister last night,” said Dalannah Bowen, an African-Canadian Cherokee member of the Women’s Memorial March committee. “At the Women’s Centre we add two names a week to our memorial.

“Why does this happen? It’s because of poverty, of homelessness, and of violence against women.”

With one of the highest urban Indigenous populations in the country, Vancouver’s Downtown Eastside has become the site of a battle over rising housing prices, a lack of affordable lodgings, and encroaching up-scale development. It’s also the place, however, where residents are fighting for their rights to safe, affordable lodging.

Although the City of Vancouver were not available for comment, one city staff person (who asked not to be named) told Windspeakerthat creating affordable housing is a priority for Vancouver, and that there have been many positive developments tackling the issue despite a lot of negative press.

However, City Councillor Ellen Woodsworth disagreed, saying that conditions were worsening in the DTES, particularly for Aboriginal women. This year, Woodsworth succeeded in passing a resolution at City Hall opening Vancouver’s first women-only housing shelter, after protesting residents occupied a public housing office and collected 4,000 signatures on a petition.

“It’s the fight of these women that enabled me in Council to push for a 24-hour shelter,” said the long-time councillor, who describes herself on her website as a ‘community organizer’ and frequently attends community demonstrations, particularly in the DTES.

While the City of Vancouver’s official housing strategy calls for affordable housing to increase at the same pace as commercial and up-scale development such as condominiums, critics claim that instead the latter has outpaced low-income housing creation by a factor of 11 to one. The result: rising property values and rents, increasing costs across the board, and a net loss of cheaper housing. This process – called ‘gentrification’ – happens in many cities, experts say, and can lead to the gradual displacement of residents from their own communities.

“[Gentrification] is a process of social transition in a neighbourhood as the population moves from low-income – often renter – to middle- and upper-income owners,” explained Nicholas Blomley, chair of geography at Simon Fraser University, which operates an Urban Studies programme only blocks from the Regent Hotel. “This is often associated with the displacement of the lower income population as rents rise, and affordable housing becomes less available.

“The fact that a large Indigenous population lives in the [Downtown Eastside], often under difficult conditions, is clearly associated with a history of dispossession and colonial policy,” he added in an earlier interview, arguing that the City of Vancouver bears responsibility for not enforcing or investigating its own housing guidelines.

But traditional policy solutions to the housing crisis – such as homeless shelters and a housing fund paid by condominium developers – have so far not worked in Vancouver, said speakers at a September 17 protest. This year’s annual women’s housing march launched a campaign to boycott businesses and developers organizers said are making life unaffordable in the DTES. Led and organized by residents, the colourful rally included giant puppets, traditional ceremony and drumming, a neighbourhood jazz band, and even salsa dancing. Elders offered prayers at the site of Simard’s death, while speakers decried the ineffectiveness of traditional solutions, calling for more fundamental change.

“They’re dead end solutions to the problems,” said Carol Martin, a community-based victim services worker at the Downtown Eastside Women’s Centre, which organized the annual protest. “They don’t see us as human beings.

“We are human beings; we have rights to housing. We do have a voice, but it’s just not heard.”

Martin, who is Nisga’a-Gitksan, emphasized that the DTES is not only a site of suffering and oppression, however. It is also a community where people care for each other and struggle for a better life.

“My love for this community, for the people who live here – they truly are the warriors of this community,” she told Windspeaker. “I’ve been trying to find hope the last dew days.

“The tide has finally turned, now I’m at a crosswalk about which way we might go. I pray to creator, to Mother Earth for guidance. We’re not only living here, but we’re making a difference. We are going to make a change.” 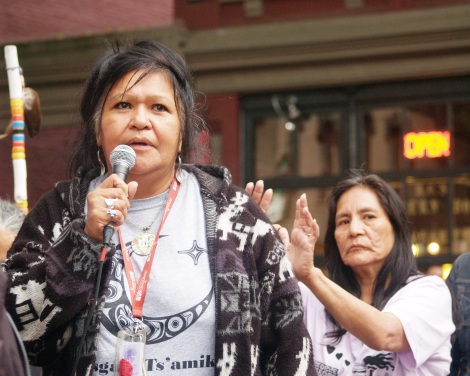