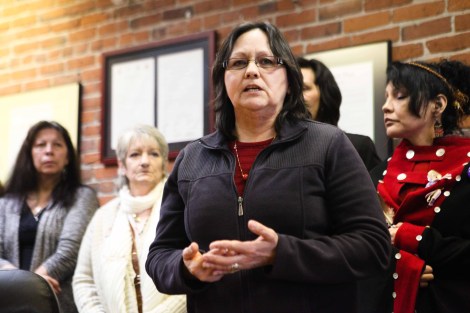 British Columbia’s inquiry into missing and murdered women—many of them aboriginal—faced a new setback Tuesday, as Canada’s largest human rights and Native groups renewed their boycott.

“We get one shot at a public inquiry, and the way it’s being conducted right now, it’s turning out to be a sham,” women’s advocate Marlene George told a press conference on April 9 on behalf of the Women’s Memorial March Committee, which organizes an annual rally to honour Canada’s 600 missing or murdered aboriginal women, among them victims of convicted serial killer Robert Pickton.

An open letter—signed by Amnesty International, the Assembly of First Nations, the Native Women’s Association of Canada and 12 other groups—decried the inquiry into why police failed to catch Pickton sooner. In 2007, he was convicted of six murders, although 33 women’s DNA was found on his farm and he confessed to killing 16 more.

“It has become painfully clear over the course of the inquiry’s proceedings that this inquiry is not a meaningful and inclusive process,” the groups wrote. “The commission appears woefully out of touch with how it may be replicating the exact exclusion and discrimination that led to this inquiry being called in the first place. The commission has lost all credibility among aboriginal, sex work, human rights and women’s organizations.”

“We’re appalled at this process,” said Lisa Yellow-Quill, co-manager of the Aboriginal Women’s Program for Battered Women’s Support Services, a Vancouver-based nonprofit advocacy organization. “We do not wish to lend credibility to this flawed process. This is not the inquiry that we called for, or other aboriginal women called for. This will not bring response to the failure of the criminal justice system, in particular for the women of [DTES] Vancouver.”

The open letter follows Métis lawyer Robyn Gervais’s April 6 resignation in protest at the “marginalization” of Native witnesses. Inquiry commissioner Wally Oppal implored groups to return now that he has appointed new counsel and resumed the hearings after a three-week hiatus.

“We cannot let the Willie Picktons of the world triumph because we get caught up on how things should be and aren’t,” he told the inquiry hearings. “The door is always open to any group or person that would like to reconsider their decisions.”

But First Nations leaders said a change of heart is unthinkable this late in the process, particularly since they would not get the chance to cross-examine police witnesses who have already testified.

“The inquiry has been a total, complete, miserable failure,” said Grand Chief Stewart Phillip, president of the Union of BC Indian Chiefs. “Wally Oppal is beating a dead horse. To expect the signers of this letter to sit in the inquiry room and gawk is completely unacceptable.”