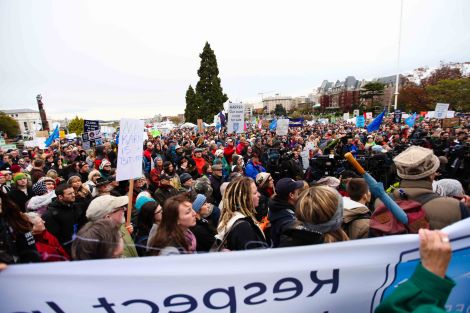 “We are diametrically opposed to the pipelines.”

That’s a message which was repeated again and again as at least 4,000 people rallied on the steps of B.C.’s Legislature yesterday (Oct. 22) for Defend Our Coast — the largest protest yet against transporting chemical-laden bitumen from Alberta’s oil sands to the West Coast.

Led by representatives from First Nations across the province and country, at least 30 speakers voiced their staunch opposition to plans by Enbridge, Kinder Morgan and Keystone to export bitumen — citing a litany of environmental risks, Aboriginal opposition, job losses and sovereignty. The protest continues tomorrow (Oct. 24) with actions planned across the province.

But the oil sands project as a whole came repeatedly under fire — with Indigenous Environmental Network spokesperson Clayton Thomas-Mueller summing up a common resolve “to defend the coast against the threat of tar sands, tankers, pipelines and everything bad about the fossil fuel sector.”

Indigenous leaders kicked off the rally — filling the Legislature building steps in colours and regalia from dozens of nations — by thanking the Coast Salish nations who welcomed them to their territories.

“We’re winning,” said Rueben George, Sundance Chief and spokesperson for Tsleil Wautuuth nation in North Vancouver, near the Kinder Morgan oil tanker and pipeline terminal. “There’s no price we can put on […] our Earth, our water, our land.”

“The people here are saying, ‘No more!’ We want to make a difference and make it better for future generations — for our children and for your children — because Kinder Morgan, Enbridge and Keystone, the owners of these pipelines, are too blind to see, because of their greed. We’re going to do it for their children, too.”

Three controversial pipeline proposals came under fire during the full-day rally: the Enbridge Northern Gateway (planned to transport nearly 63 million litres a day to Kitimat, B.C.), plus the nearly 61 million litre-daily expansion of the Keystone XL pipeline to Texas, as well as the twinning and expanding of Kinder Morgan’s TransMountain pipeline to Burnaby, B.C. to nearly 90 million litres a day.

Arriving on the Victoria, B.C. lawns fronted by elected and traditional Indigenous leadership, followed by drummers, the crowd swelled over the course of the day after BC Ferries had to turn away hundreds from the Mainland from sailing due to unexpected numbers.

Despite organizers’ touting the action as the largest act of civil disobedience on the tanker issue — and spending the previous day training activists prepared to be arrested for the cause — police monitored the crowd from the sidelines and atop the government building, but did not intervene. The only rule-breaking that took place was hundreds of activists staking an oil tanker-length banner into the lawns.

“We have a Legislature here that’s empty right now, and they’re not listening to the people of British Columbia. They think that we’re for sale. They also think, in Ottawa, that they can jam this thing over the backs of British Columbians … Coastal first nations — and all the tribes in the Interior — we’ve been stating our opposition for a long time now. But we’re so happy that 3,000 of you have come out to join with us today … It’s your voices that we need to join with us.”

Speakers at the rally also included union leaders representing thousands of workers in the oil and gas sector — including the Alberta oil sands themselves, as well as refinery plants — who said the proposed Enbridge Northern Gateway and Kinder Morgan TransMountain pipelines threaten the country’s environment, jobs and Aboriginal communities.

“Our union is diametrically opposed to building the pipelines,” said Dave Coles, President of the Communications, Energy and Paperworkers (CEP) of Canada. “I don’t know what these clowns have got in their minds, but these pipelines are job-killers.”

“These pipelines are bad for the environment. They don’t respect First Nations rights. And they are destroying the economy of Canada. How on Earth do you justify pumping raw bitumen to some foreign land to be processed?”

Another labour organizer, Guy Johnston, representing the United Fishermen and Allied Workers Union (UFAWU), said that B.C.’s economy and future is threatened by the risk of oil spills from tankers and oil spills. Referring to his own boat laden with fish in nearby Cowichan, Johnston called on the government to support sustainable industries to benefit all British Columbians. “We’re here because it’s our jobs that are going to be on the line if the Northern Gateway project goes ahead,” he told the crowd. “We very much oppose this.”

“[Fishing] is a sustainable industry — that’s the future we want to see on this coast. I want to be able to fish with my kids, and for my kids’ kids to continue to fish on into the future. That’s the sustainable future we want. We are diametrically opposed to the Northern Gateway. When we look to our brothers up in Alaska — who are still suffering the devastating oil spill from the Exxon Valdez — we don’t want to see that on the coast of British Columbia.”

It is not only the Exxon Valdez spill that lives in the memory of pipeline opponents, however. Speakers from Alberta spoke about a series of pipeline spills — including one by Enbridge itself — and the devastating consequences for communities downstream, who they said have been left with health and birth impacts, on top of the loss of land-based lifestyles due to pollution.

Enbridge’s 2010 oil spill disaster in the Kalamazoo River, Michigan — which this year the U.S. government blamed on the Alberta company’s culture, recklessness and negligence — was also cited as a risk B.C. is simply unwilling to take.

“Thank you, regular people of British Columbia. It is through your efforts, standing with us, that we’re winning this fight. And I look forward to the celebration at the end.”