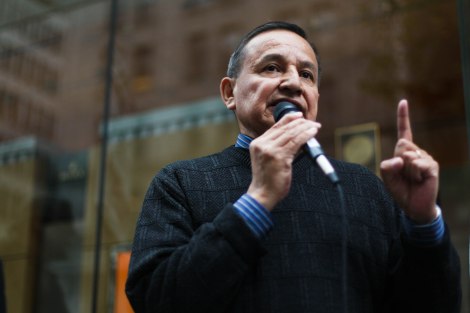 Grand Chief Stewart Phillip of the Union of BC Indian Chiefs. Photo by David P. Ball

First Nations from across British Columbia are traveling to the provincial capital, Victoria, on Monday for what is being billed as the largest civil disobedience protest against the oil sands, pipelines and tanker ships yet.

Thousands are expected to rally on the lawn of the B.C. legislature in Victoria in the Defend Our Coast protest—the name of the organizing group—and aboriginals are at the forefront.

The protest is proof that non-Natives and aboriginals alike are now awake to the dangers of oil tanker traffic as well as the Enbridge and Kinder Morgan pipelines, said a spokesperson for the Yinka Dene Alliance, a coalition of indigenous communities in the province opposed to a number of pipeline proposals.

“It will provide more attention to this issue,” said Chief Jackie Thomas, the leader of Saik’uz First Nation, to Indian Country Today Media Network. “Regular people of British Columbia have become more educated—and they’ve come on board to support this pipeline not being built.”

Many Canadians already have a high regard for environmental issues, she said, and now they are starting to have a voice.

“Sometimes governments want to bully us,” she said. We need to help people have a voice, and wake up to all the damage we’ve been doing to our Mother Earth. They aren’t happy with leaving that to their grandchildren either. We need to have a sustaining society, economically as well as environmentally. That’s a concern we all share.”

First Nations across Canada, including the Union of B.C. Indian Chiefs and the Assembly of First Nations, have condemned two separate oil sands export plans in the works: Enbridge’s proposal to build a pipeline across the pristine north of the province, to an oil tanker port in Kitimat, B.C., and Kinder Morgan’s proposal to double the output of its existing TransMountain pipeline to the major south-west port of Burnaby, just outside of Vancouver.

Celebrities have lined up to endorse the protest, including Darryl Hannah, who has already been arrested protesting the Keystone XL pipeline proposal under contention in the United States. Also endorsing Canada’s protest are celebrities including Pamela Anderson and Michael Moore, as well as former Canadian United Nations ambassador Stephen Lewis and Nobel Prize–winning economist Mark Jaccard.

For scientist and veteran environmental broadcaster David Suzuki, the leadership of First Nations in opposing oil sands transport to the coast has been vital in raising public awareness.

“The thing that British Columbians should be very grateful for is the 100 per cent opposition of coastal First Nations to these pipelines,” the Right Livelihood Award-winner said.

“I’ve gone into every one of the communities along the coast,” he said. “They’re desperate for jobs; they’re desperate for economic development. And yet, despite the offers of millions of dollars from Enbridge, they are 100 per cent opposed to the pipeline in their territory. Why? They’re telling us there are things more important than money. They’re telling us that culture, history and the future are all tied up in the threat from the supertankers that will come through. We have to be listening to that.”

For Grand Chief Stewart Phillip, president of the Union of B.C. Indian Chiefs, the indigenous opposition to industrial developments such as pipelines and tanker ports is the result of a failure to respect First Nations’ right to be consulted or respected.

“Now more than ever we need to rise up and come together to defend the legacy that we will leave our children and grandchildren,” he told ICTMN. “It’s going to impact us in a profound way, and it’s certainly going to provoke a reaction in terms of us being hard-pressed to protect the integrity of the environment of our territories. Canadians, and certainly British Columbians, have to reexamine their values with respect to the integrity of the environment within B.C.—which makes this one of the most beautiful places in the world—considering the lack of benefits, and the tremendous risk attached to these projects with respect to oil spills, [and] tanker spills along the coast.”

Enbridge and Kinder Morgan both insist that their pipeline proposals are safe and will provide economic benefits and jobs to the province. But even the provincial government has become increasingly critical of Enbridge, which is still reeling from an oil spill disaster in Michigan several years ago.