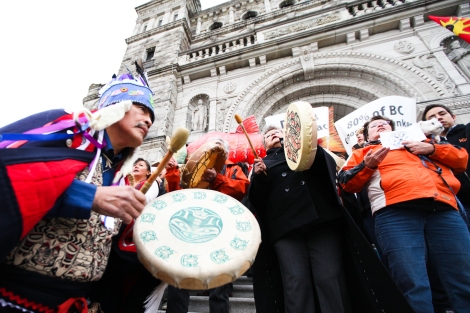 Hundreds of Aboriginals filled the steps of the B.C. Legislature, joined by 4,000 protesters. Photo by David P. Ball

Melina Laboucan-Massimo’s family has felt the impacts of an oil spill disaster firsthand on their Lubicon Cree territories in Alberta: burning eyes, headaches, nausea and dizziness.

On October 22 she brought her cautionary tale to 4,000 protesters in front of the provincial legislature building in Victoria, British Columbia. Rallying against a trifecta of pipelines proposed to export bitumen from Alberta’s oil sands, demonstrators reiterated longstanding warnings that the pipelines and further development of the sands threaten Canada’s rivers and pristine West Coast. The events brought some of Canada’s biggest labor unions, including thousands of fossil-fuel-industry workers, together with large environmental groups and aboriginals.

“To this day, I continue to carry that grief and the sadness from knowing what our people are going through, and what is happening to the land,” the Greenpeace climate campaigner and Lubicon Nation member said, describing her family’s symptoms after a major pipeline rupture in 2011. “The land and people will never be the same. And I would hope that no other community would have to go through this. That’s why I’m here today.”

Led by hundreds of leaders and community members from dozens of aboriginal nations, and livened with drumming and songs, the protest launched three days of opposition to the Enbridge Northern Gateway, the Kinder Morgan TransMountain, and the TransCanada Keystone XL pipeline proposals, the latter already under fire south of the border.

The Enbridge Northern Gateway pipeline, a 731-mile-long affair that would transport oil sands bitumen from Alberta west to a supertanker port in Kitimat, B.C., is currently undergoing government review. Also under scrutiny are TransCanada’s 1,700-mile Keystone XL pipeline south to Texas, as well as a planned expansion of Kinder Morgan’s TransMountain pipeline to Burnaby, B.C. The companies behind the projects insist that rigorous safety standards are in place.

On the second day of protests, activists in Vancouver, B.C., took over a Shell gas station in support of Athabasca Chipewyan First Nation, which launched a constitutional legal challenge against the oil giant and the federal government for allegedly abrogating their treaty rights to hunt, fish and harvest on their territories. And on October 24 at least 67 communities across the province mobilized protests outside federal politicians’ offices in the most widespread anti–oil sands and pipelines events yet.

Bearing personal witness to the effects of oil sands development on Indigenous Peoples, Laboucan-Massimo addressed the crowd on Monday.

First Nations have spoken out against pipelines like the Northern Gateway from the beginning, and Enbridge’s persistence is only making it stronger, one chief said.

“We said no to Enbridge,” said Terry Teegee, chief of northern B.C.’s Carrier Sekani Tribal Council. “We stated our informed decision six years ago. Why does Enbridge keep coming back? It just baffles me. I want to tell [Prime] Minister Harper: No matter what you do with the environmental assessment process, no matter what tricks you play in watering down the environmental assessment process […] your responsibility is to protect our animals for the future. No, this project isn’t going to go through!”

The events signaled a historic shift in relationships between environmental groups organizing the protests, which included Greenpeace, Tanker Free BC and the Western Canada Wilderness Committee as well as numerous First Nations. Of the 30 speakers at the legislature, most were indigenous. Protocols acknowledging the territories of the local Songhees, Lekwungen and Esquimalt nations were emphasized.

Taiaiake Alfred, professor of indigenous governance at the University of Victoria, said he hopes that the lesson of unified opposition to the oil sands, pipelines and tanker plan spreads.

“It’s good to see such a broad representation of indigenous groups,” he told Indian Country Today Media Network. “The fact that there were a lot of people there, and a lot of groups represented, proves this is an issue that impacts a lot of people. It’s not just certain specific First Nations communities affected by this. A lot of people see it as a problem because they’re aware of the idea of the tar sands and dirty oil. It doesn’t have to affect your particular nation, physically, [for you] to really care about it and want to do something about it.”

The author of Wasase: Indigenous Pathways of Action and Freedom (University of Toronto Press, 2005) told ICTMN that defending the land has the capacity of uniting many diverse communities, and implied that things could heat up.

“The lesson is in the potential for a principled opposition to the destruction of the land, and how powerful a draw that is in the larger society,” he explained. “I hope the people who were there, both First Nations and non–First Nations people, are committed to carrying this forward when it goes beyond protest to actual conflict.”