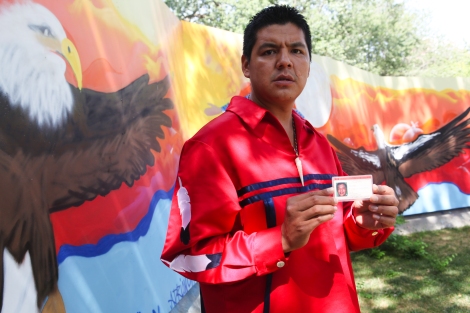 Two Anishinaabe  men attempting to renounce their Indian Status under Canada’s controversial Indian Act are being rebuffed by the Ontario government.

“People think their rights are tied solely to a Status Card that allows them to have all the little amenities we have,” Peters told Indian Country Today Media Network. “But by using these cards, it allows the government to continue to enforce the Indian Act on us. The Indian Act is the most racist (law).”

Wearing a traditional ribbon shirt, Peters displayed his status card, adding that when he tried to relinquish status, he was warned he could lose both his aboriginal rights and his Canadian citizenship.

The wide-ranging law governs many aspects of life for First Nations. It also created Canada’s reserves, which today are hotbeds of poverty and unemployment. In fact, when South African legislators created apartheid, a delegation traveled to Canada for inspiration.

Aboriginal Affairs and Northern Development Canada acknowledged that renouncing Indian status is more complicated than simply turning in a card.

Peters pointed to the end of apartheid as a sign that Canada lags far behind.

“It was so effective in our repression that South Africa modeled its own apartheid laws after what Canada has done,” he said. “But they got rid of theirs. We still have ours here. People have been conditioned to fear, ever since the Indian Act was in place. Our ancestors, not too long ago, were forced onto reserves at gunpoint. And by these same officials, we were forced into residential schools. When the Residential Schools were phased out, people were taken under the Children’s Aid Act. I was one of those people. The government consistently pushes the fear button.”

Assembly of First Nations National Chief Shawn Atleo repeated his opposition to the Indian Act on September 4, after a group of cross-country walkers on the March 4 Justice arrived in Ottawa to protest the law. Organizer Leo Baskatawang hiked from British Columbia with a copy of the Indian Act chained to himself.

“Moving beyond the Indian Act is about ending unilateral approaches by government and supporting and empowering First Nation governments to drive solutions in ways that respect their rights, responsibilities and decision-making abilities,” Atleo said in a statement.

Previous attempts to change the Indian Act have failed because of a perceived failure to consult with First Nations. In 1969, the government’s White Paper triggered a massive Aboriginal mobilization calling it assimilationist. Likewise, the 2002 First Nations Governance Act was scrapped after opposition from Aboriginal groups who saw it as an attack on sovereignty. This January, a private members bill in Parliament to scrap the law came under fire.

A spokesperson for John Duncan, Minister of Aboriginal Affairs and Northern Development, pointed to new legislation as a sign Canada is listening.

“Our Government recognizes that it is time to make important changes to the Indian Act,” Jan O’Driscoll, Duncan’s press secretary, told ICTMN. “That is why we have committed to work with First Nations leaders and stakeholders across the country to make key changes that will modernize this Act.

“Aboriginal Canadians have been calling for this type of change and this Government is delivering.”