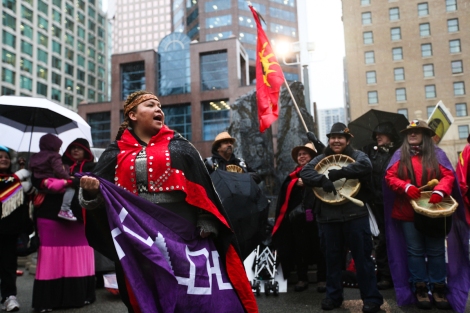 The second wave of Idle No More protests swept across Canada on Friday December 21, with support events held across the U.S. and as far away as Europe and New Zealand, less than two weeks after the movement burst onto the political scene on December 10.

Indigenous activists used social media websites to organize round dances, highway blockades, protests and ceremonies from east to west of the country, as Attawapiskat First Nation Chief Theresa Spence entered her 10th day of a hunger strike that she has vowed to see through to the end.

Thousands of people turned out for social media-organized flash mobs—seemingly spontaneous assemblies in malls and other public places—in B.C., Alberta, Saskatchewan, Ontario and beyond, and rallies criticized not only the federal omnibus budget bill C-45, which passed into law this week, but also the wider living and rights conditions that aboriginal peoples are subject to.

“Being in Ottawa at the rally, amongst thousands of our brothers and sisters from indigenous nations all over Canada, dancing, singing and drumming was a spirit-filling moment for me,” she told Indian Country Today Media Network. “You could feel the pride in our peoples standing shoulder to shoulder to protect our future generations. The energy was palpable and you could feel that our ancestors walked with us. The wind blowing through our Nations’ many flags was symbolic of our collective strength. Despite the cold, snow and wind, the spirit that has been relit in our peoples has enough heat to keep us in this grassroots movement for the long haul.”

The mood was equally ebullient in Vancouver.

“Today my heart is full, because the shift is happening,” said Nuxalk and Six Nations artist Jerilynn Snuxyaltwa Webster, who raps under the name JB the First Lady. “Our people—our beautiful, indigenous people—are rising. I’m sick of colonization telling us that we are criminals, telling us that we’re no good, telling us that we don’t deserve what is ours. Stephen Harper: We’re coming together. It’s not just a flash mob. If our lady, Theresa Spence, passes away, we’re showing the entire country what kind of power we have.”

Webster added that the Idle No More phenomenon is not merely aimed at a particular piece of legislation or even just the government.

“This movement, this uprising, is not for the Canadian government to talk with us,” she told a crowd gathered in Vancouver, B.C. “It’s for us to come together to build unity, no matter what color the skin is, what your blood quantum is, what nation you come from, if you’re treaty or non-treaty, status or non-status, Métis or Inuit. Those are the boxes they put us in—they try to divide and conquer us, but they haven’t. We overcame acts of genocide; we are still here.”

Winnipeg, Manitoba, broadcaster and Anishnaabe musician Wab Kinew told Indian Country Today Media Network that Idle No More has grown from a reaction to Bill C-45, to a broader movement.

“Idle No More is definitely about indigenous rights, culture and sovereignty,” he said. “But the ideals that underlie it are ones that matter to all Canadians—they’re about rights, freedom, the environment, preserving a positive environment for our children.”

And while C-45—a sprawling piece of legislation that reduces the number of referendum votes needed to give up reserve lands for development, and that critics say guts waterways protection—may have sparked the protests, it has unmasked a much deeper dissatisfaction.

“There are so many tensions and issues in the aboriginal community, the indigenous community,” Kinew said. “Missing and murdered women, poor health outcomes, poor education, poverty, social issues, racism, and on and on and on. Bill C-45 was the match, but it landed on a tinderbox or powder keg. Now you’re seeing all these other issues come to the surface.”

The National Chief of the Assembly of First Nations welcomed the growing movement.

“The Idle No More effort is growing like wildfire across the country,” National Chief Shawn A-in-chut Atleo told ICTMN. “It’s really a grassroots effort. It’s First Nations and Canadians standing up, stepping forward, and saying that what’s happening in this country—overstepping aboriginal title and rights, treaty rights, basic human rights, and the right to life and dignity, this pattern of mistreatment of First Nations—has to end.”

Mohawk political analyst Russell Diabo said that Idle No More has indeed tapped into a wellspring of discontent.

“Instinctively, they know what’s wrong with what the Harper government’s doing—pushing this suite of legislation—and they’re reacting to it,” he told ICTMN. He added that he hoped aboriginals would use this momentum to educate themselves in depth about the issues they were protesting.

“There are certainly many more bills than C-45 that are amending the Indian Act and going to have an impact on aboriginal treaty rights for First Nations across Canada,” he said. “They need to be more articulate about how it really impacts them.”

Diabo, a policy advisor for several First Nations as well as editor and publisher of the newsletter First Nations Strategic Bulletin, warned that pending Indian Act amendments could lead to the “termination” of aboriginal title and rights by getting aboriginals to sign those rights away in negotiations with government. Rights would be further eroded by the introduction of individual, fee-simple land ownership on reservations.

“They’re still using the Indian Act as the main statute to control and manage Indians with these new amendments, but also they have policy initiatives,” Diabo explained. “Basically their policies are one-sided polices that the federal government has drafted to interpret Section 35 of Canada’s constitution about what’s on the table and what’s not on the table. They want to extinguish aboriginal title through these modern treaties.”

Aboriginal Affairs and Northern Development Canada (AAND) denied that the government is attempting to extinguish or terminate indigenous rights.

“In fact, it was First Nations themselves who asked for these changes so that they could better use First Nations lands to improve the economies and self-sufficiency of their communities,” Jan O’Driscoll, spokesman for Minister John Duncan, told ICTMN. “There is a misconception that these amendments will allow a First Nation community to ‘sell-off’ First Nations land. This is false. These amendments are only about leasing and have nothing to do with surrendering reserve lands, and [they] allow First Nations to economically benefit from their lands and to manage them according to their by-laws. Any lands designated will still require chiefs and councils to consult their community members and gain their permission to take advantage of these new provisions.”

And while tens of thousands of people took to social media to broadcast their Idle No More events, the Alberta woman who began the Twitter hash tag said the movement’s growth was overwhelming.

“All the photos and tweets I have been seeing all morning around the world for #IdleNoMore today has been truly and deeply the most humbling thing I have ever been a part of,” said Tanya Kappo, a a Sturgeon Lake Cree Nation member living in Edmonton. “The love and pride that shines so brightly through fills me with a joy so profound it makes me weep.”