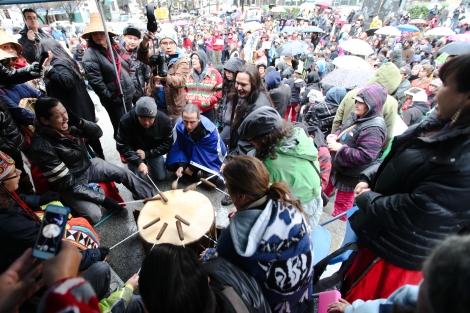 A Dakota group drums in honour of Chief Theresa Spence’s hunger strike, as 600 people attending an Idle No More rally in Vancouver, B.C. pray for her health. Photo by David P. Ball

As Attawapiskat First Nation chief Theresa Spence enters her 13th day of a hunger strike protest on December 24—surviving on only medicine tea and fish broth in a tipi near Parliament Hill—supporters say her strength is ebbing, but her resolve is not.

Spence began her fast on December 11, one day after the Idle No More indigenous rights movement sprouted across Canada. The Ontario chief is demanding a meeting with Prime Minister Stephen Harper and a representative of the Queen to fix the broken relationship with Indigenous Peoples. Though she spends much of her time resting, surrounded by traditional drummers, singers and fire-keepers, Spence insists she is willing to die.

“She’s lying down or sitting, and she goes out for walks in the yard around the fire,” missing-women activist Gladys Radek told Indian Country Today Media Network after visiting Spence on December 22. “Right now she’s doing a lot of resting. She is getting weaker, but her stance hasn’t wavered. She’s got no fear of death. You could see it and feel it: She is not afraid to die. She’s a real stubborn woman. I feel very proud of all our First Nations people for standing up and saying, ‘No more!’ I feel very honored that it took one little woman to move the world.”

Radek, Gitxsan and Wet’suwet’en, told ICTMN that she sat with Spence around a bonfire on Victoria Island, just minutes from Ottawa’s Parliament Hill, while fire-keepers smudged with sage and visitors offered tobacco.

“We were allowed to go in and see her just for a few moments,” Radek said. “I was really moved by it. I spoke to her about how much support she’s got from all over the world. She told me that she is getting a little bit weak. It’s really something that I never thought I’d witness in my lifetime—this soft-spoken woman with such strength and resolve. I told her, ‘The whole nation is praying that Prime Minister Harper comes and speaks to you immediately.’ Quite frankly, we do not want a martyr here. We don’t.”

Assembly of First Nations National Chief Shawn A-in-chut Atleo has also visited Spence. She is “in good spirits, but feeling weak,” he told reporters in a conference call on December 21. “She has a tremendous amount of support. There are pipes being lifted and prayers being offered.”

Spence came into prominence in early 2012 when she declared a state of emergency on her reserve. It led to international media coverage and public outcryover the community’s abysmal housing and health conditions—a situation that, while extreme, is common on many reserves in Canada. Prime Minister Harper’s government responded to her plea for assistance by seizing control of the band’s finances, but Spence objected, took the dispute to court—and won.

The current hunger strike, she said, is for all aboriginal communities, not simply her own. “I am not going to give up,” Spence told the Aboriginal Peoples Television Network (APTN). “I am here for my people, for our rights. The government needs to really open its heart. I don’t really see myself as a saint or anything like that, or a hero. There are times when you can’t take the pain, you have to do something. This is why I am doing it. There is too much pain, that pain has to go away. If not, the pain is going to get worse, and things will get worse.”

The head of Ryerson University’s Indigenous Governance program told ICTMN that Spence’s hunger strike is emblematic of indigenous oppression, and resistance, across Canada.

“Each day that she does not eat, she is slowly dying. And this is what is happening to First Nations in this country,” Pamela Palmater said. “The purposeful, chronic underfunding of essential human services like housing, water, sanitation and education has resulted in our pre-mature deaths by up to 20 years, youth suicides, over-representation in child and family services, prisons and hundreds of murdered and missing women. Chief Spence’s pain represents the pain of our peoples. She is a true warrior spirit who is humble, determined and prepared to die for our peoples. We are all inspired by her strength and stand beside her in solidarity.”

And while Harper has not expressed any move to meet with Spence, Conservative Senator Patrick Brazeau criticized her fast as a setting a “bad example” for young aboriginals.

“Obviously, her health should be first and foremost, top of mind to everyone, including myself,” Brazeau told APTN. “But having said that, I personally don’t believe in Canada, in 2012, that is the way to go, and I don’t really believe it sets a good example for young aboriginal youth. If people don’t take advantage of our democracy and those processes in place, well that is unfortunate for those who choose not to.”

Aboriginal Affairs minister John Duncan told ICTMN that he is also worried about Spence’s health, but insisted he has attempted to contact her to meet, to no avail. Spence said she will only give up her fast upon meeting with Harper and the Governor General, representing the Queen.

“Since she began her hunger strike I have indicated that I would be pleased to meet with her,” Duncan told ICTMN. “I have also attempted to reach her by phone several times. I have expressed my concern for Chief Spence’s health. We remain committed to the belief that the best way to achieve our shared goal of healthier, more self-sufficient First Nation communities is by working together.”

As activists staged a second weekend of Idle No More rallies—dubbed the Round Dance Revolution because of thousands participating in traditional circle dances in public—people at many rallies prayed and sang for Spence.

“She’s a great inspiration,” Krazie Nish, a Gitxsan and Mohawk activist, told ICTMN. “She’s led people across Turtle Island—not just in Canada—who are doing their own hunger strikes in support of what Chief Spence is doing.”

“It definitely seems as though the world has chosen her to be a catalyst or a primary actor in bringing some of these issues to the forefront,” he told ICTMN. “She’s a special person, and I pray for her well-being.”

Radek told ICTMN that though Spence is still strong two weeks in, her entourage seemed anxious about her survival. Meanwhile, other Canadian aboriginals have joined Spence, including 72-year-old Cree Emil Bell, of Cole Bay First Nation, Saskatchewan, and 51-year old Manitoba resident Raymond Robinson, according to CBC News. With Assembly of Manitoba Chiefs Grand Chief Derek Nepinak warning that if Spence dies, “the long silent war drums of our people must ring loudly in the ears of everyone,” asAPTN reported, Radek concurred there would be widespread upheaval if Harper fails to meet the fasting chief.

“The only thing we can do is hope and pray that the Prime Minister finds the heart,” Radek said. “How in the world can this man, on December 25, sit across the table from his wife and family, going ahead with his dinner, when he knows all he needs to do is talk to this woman who is starving? How can he, with a clear conscience, even think about Christmas dinner, when so many of our people and our children are starving? There’s going to be blood on his hands. What’s she’s fighting are crimes against humanity. If she dies, I believe there ‘s going to be a huge, huge revolution. People are angry. We’re all tired of living the way we have.”