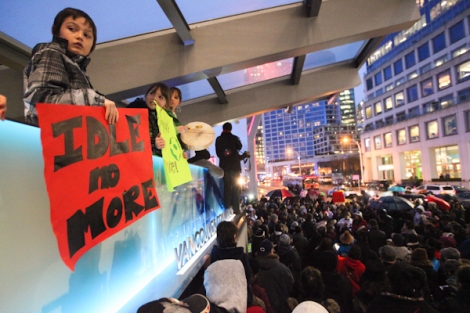 Idle No More participants in Vancouver, B.C. rally outside downtown’s Canada Place, as local organizers prepare for another event at the U.S. border on January 5.

With the Idle No More movement rapidly spreading outside Canada’s borders – seeing Indigenous rights protests emerge as far away as Texas, New Zealand, New York and the United Kingdom – activists in Washington State and British Columbia are planning an action Saturday, January 5th that literally spans the frontier.

The meet-up at the famous Peace Arch monument – described as a “peaceful prayerful gathering of Indigenous women, supported by our Indigenous men, standing united – will see Indigenous activists and supporters rally their drums, songs and prayers for change on both sides of the border.”

“It’s a peaceful, prayerful action,” Kat Norris, spokesperson for the Indigenous Action Movement, told Indian Country Today Media Network. “We, the organizers, want to ensure that we are going into this with good and strong hearts. Doing this at the border, with our relatives from the other side of the border joining, we’re making a statement that support comes north and south, and east and west to join this. It’s a symbol of support for Idle No More and everything it stands for – and for Chief [Theresa] Spence.”

Organizers of the border gathering emphasized the event is a ceremony, not a blockade or disruption.

“It’s a ceremony with smudging, drumming and singing,” Norris said. “We’re following protocol – the other side will sing a welcome song. We will sing our song and why we’re there (…). There are many stories my mother and grandmothers shared of visiting our relatives. That border divides our families.”

Norris said that crossing the border has painful significance for many Indigenous Peoples, who once freely roamed through their territories before the arrival of Europeans or enforcement of their boundaries.

“It’s also a symbol that we do not see the border as an actual border,” she said. “It’s a man-created border. Historically, as Indigenous people, we’re supposed to be able to cross the border freely; our people did: they travelled all over Turtle Island. Every time we have to cross a border, it hits our hearts. It only reminds us of what we once had.”

The January 5 event emerged after the cancellation of a separate event faced controversy over its plan to blockade the U.S.-Canada border. That plan came under fire from aides to hunger striking Chief Spence last week, and its original organizers stepped back “out of respect” for Spence’s request.

The confusion over the border event comes as the Idle No More movement continues to broaden its appeal and spread geographically, fueled by growing discontent, frustration and social media. But it also represents a simmering tension between grassroots community members and First Nations leadership. Spence has called for unity, and other First Nations leaders and Idle No More’s original organizers echoed the sentiment in online statements.

Idle No More is described as a grassroots, leaderless movement for Indigenous rights. It initially emerged as a criticism of current federal legislation, including Bill C-45, which would reduce the threshold of votes to surrender reserve lands, and weaken waterway protect, activists allege.

And as the phenomenon spreads, so have its tactics varied – from massive round dance flash mobs in shopping malls and intersections, to a two-week railway blockade in Sarnia, Ontario which ended January 2 after a court injunction. Activists have also held hour-long blockades of highways and roads in solidarity with Idle No More and Chief Spence, who is on Day 25 of her now-famous hunger strike, demanding a meeting between the Prime Minister, Governor General and Aboriginal leadership.