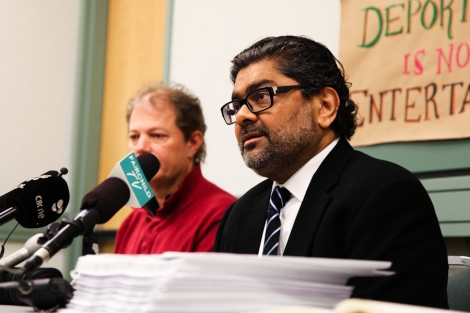 Detainees’ lawyer Zool Suleman (right) is flanked by Amnesty International regional coordinator Don Wright as he demanded an apology over a filmed border raid this month. In front of him: a 20,000 signature petition against the television show. Photo by David P. Ball

What Diana Thompson and her eight-year-old daughter hoped could at least be a tearful goodbye turned to sobs of frustration as her husband was evicted from Canada late last night.

One of eight undocumented workers rounded up in a Vancouver construction site earlier this month — all under the gaze of a television show crew — Tulio Renan Aviles Hernandez was deported to his native Honduras, unable to see his family at the airport.

“It’s been very difficult watching my daughter have to deal with this,” Thompson said. Tears flowing down her cheeks as supporters offered hugs and condolences, and vowed to continue fighting the deportations and television show “Border Security.” “She seems very upset and confused at times.

“She questions why she can’t have her dad at home. It’s very hard to watch her go through this and try to answer her questions… Me and my daughter would like a chance to go down there, hopefully in the summertime… That’s the one thing we’re staying hopeful about: a chance to go see him.”

Today, the lawyer for the detained men demanded an apology from federal Public Safety Minister Vic Toews, the Canada Border Service Agency (CBSA) and the producers of a television show which filmed the raid.

Lawyer Zool Suleman told reporters today that the presence of a film crew, and news that Toews personally signed off on the show, is “stigmatizing, demeaning and dehumanizing” to his clients.

“My clients are not here for the entertainment of other people,” Suleman said today.

“The Immigration and Refugee Protection Act allows the minister to enforce the conditions of the Act; we are not in disagreement about that. But nowhere in the Act does it say you can demean, humiliate, stigmatize, or broadcast that whole process on television.”

Suleman argued that the detainees’ Charter rights had been violated because the men were allegedly unable to access legal counsel before questioning. Additionally, Amnesty International expressed concern the men could be in danger as a result of the publicity and filming.

When asked about the requested apology and Suleman’s allegations of Charter violations, CBSA told The Tyee that there were no privacy violations, and stated again that any filming was with consent. The agency did not comment on whether it would apologize.

“The CBSA respects and adheres to the provisions set out by Canada’s Privacy Act,” spokesperson Maria Ivancic said in an emailed statement. “Any action taken by the CBSA is done in conformity with privacy legislation and in accordance with Canadian law.

“At all times, our foremost concern is to ensure that operational, legal and privacy considerations are met. At no time has the CBSA divulged the names, images or circumstances of the individuals involved in the enforcement action of March 13, 2013.”

Today, a thick, 20,000-signature petition to cancel the show “Border Security,” which bills itself as documentary, but which activists have labelled reality entertainment, was taken to production company Force Four’s offices in Vancouver.

“There have been complete mischaracterizations and false information reported this past week about ‘Border Security: Canada’s Front Line,'” a company spokesperson said in an email. “Border Security is a documentary series — not a reality series and in absolutely no way are any situations orchestrated for the cameras.

“We only film events that are already taking place — and that would be taking place even if the camera wasn’t present.”

For Thompson, the media’s steady coverage of the dramatic workplace raid, followed by news that Toews himself signed the agreement between CBSA and Force Four, allowing the department oversight over the final product, has missed the point: her husband was not the threat or “illegal” she saw him portrayed as.

“That’s not him!” she said, when read the show’s description. “It’s funny how they try to lump everybody who’s emigrating here into certain categories that they choose, the titles they want to give them… Nobody seems to really be concerned about his story and why he was here, and why he came to Canada originally. He had a family to support back there.

“His father was diagnosed with cancer and passed away; his sister is extremely ill. There’s medical bills on his part he had to help try to take care of. It’s been very difficult on his part and our part.”

Both Amnesty International and the BC Civil Liberties Association have issued letters of protest over the show’s filming.